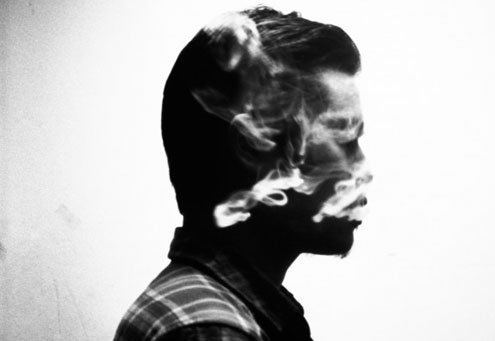 Dirty Beaches' "Badlands" is cinematic and disintegrated rock and roll.

Film and music occasionally intersect. I first heard Dirty Beaches while driving home from work one late winter night. “Sweet 17,” a dusty rockabilly number that struts like the theme song to a David Lynch-directed Elvis biopic, almost made me wreck my car. I wasn’t paying attention to the road anymore. The music swept over me like a spastic Hollywood reverie.

You can’t talk about Alex Zhang Hungtai’s one-man band Dirty Beaches without mentioning his music’s unearthly, cinematic affectations. Despite drawing from a number of notable musical and film influences — musicians like Suicide and Roy Orbison, Hong Kong director Wong Kar Wai (“In The Mood For Love”) — nothing else sounds quite like him. Zhang’s voice recalls a long-ago, alternate dimension where old-school crooning could sound as edgy and disturbing as it does sexual. It’s a disintegrated, vintage kind of rock and roll — mined for all its romance and darkness, and brought to life in the listener’s mind by an intimate incantation of silver screen images. Zhang’s attitude-laden live performances are no less bewitching. Over the ascendant first notes of the album’s most haunting song, “Lord Knows Best,” he draws out a black comb and sweeps it through slicked-back hair.

Dirty Beaches’ latest LP, “Badlands,” was released in March. The album is a conceptual work about a man who’s always on the road, drawing in part from Zhang’s life migrating across Taiwan, Honolulu, San Francisco, New York City and Montreal (where he’s now based). Director Terrence Malick’s desolate 1973 drama of the same name — about a teenage girl and ne’er do well who go on a killing spree across the country — is a striking influence. But more evident is the smokiness and longing of Wong Kar Wai films like “Chungking Express” and “Happy Together.” The characters in these films are afflicted with loneliness, more displaced and misunderstood than alienated. Replace their film scores with “Badlands” and the tone wouldn’t change.

I interviewed Zhang by email to get more of his thoughts on the connection between movies and music.

What movies were you watching during the making of “Badlands”?

I always enjoyed film noir. Other than previously mentioned directors who’ve influenced me from a young age like David Lynch, Wong Kar Wai, and Jim Jarmusch, the movies I watched during “Badlands” were perhaps more subliminal in their influence: “Rebels of The Neon God” [1993, directed by Ming-liang Tsai], “The Loveless” [1982, directed by Kathryn Bigelow], “La Jetee” [1963, directed by Chris Marker], and a Werner Herzog boxset my girlfriend got for me during out last visit to China. I watched his entire filmography. I love Herzog — I will watch anything that he makes because I’m more interested in the person making the film than the film itself. Herzog is a great artist. People who criticize his new movies (like “The Bad Lieutenant: Port of Call” with Nicholas Cage) are just jealous of him. Those who complain will never be remembered.

I’ve read that you started watching foreign films in the mid-90s while working nights at a video store, but didn’t start making music until about 2000. Why were you drawn to music more than, say, filmmaking?

Music was a lot cheaper than filmmaking ten years ago. Now, with cheap digital cameras and powerful editing software, it’s more accessible. I’m thinking of expanding to formats other than music. Mostly film. Someday I might compile a collection of short stories I’ve written over the years. I’m not a big tech guy, as I’m only interested in translating ideas with what I can afford. Digital is more affordable. I don’t have delusions of grandeur. I only think in terms of what I can work with.

So many Hollywood movies these days seem to use overbearing film scores to convey emotion. Do you think there’s a right or wrong way to implement music in a film?

I don’t think there’s a right or wrong way for art. It’s based on decision-making, and the results would be predictable if rules were applied. Take the film score Radiohead’s Jonny Greenwood did for P.T. Anderson’s 2007 film “There Will Be Blood.” It was overwhelming. But very fitting for a film about a greedy oil magnate.

Tell me about Evan Prosovsky’s film “Water Park” and the score you’re composing for it.

Water Park is a movie about an indoor, man-made beach resort inside an Edmonton, AB shopping mall. The protagonist acts as an observer, exploring this kitsch, exotic, plastic fantasy world without any judgment. I met Evan in Vancouver through mutual friends and he asked me to write the score after showing me a few clips. It was a nice challenge for me to work on the score, since it’s not a film with a dark theme (the past three scores I’ve written have been dark). I really liked the “neutral” attitude of the character, which was why I thought ambient music would work well with it.

What sets Wong Kar Wai’s films apart from other directors films for you?

Wong Kar Wai hit me harder than other directors because I was only 16 when I came across his films. They burned a hole on my psyche. The repetition of music themes in his films is hypnotic. That’s something I try to convey in my own music.

You’ve said that you’re writing soundtracks for films that don’t exist. What pictures do you want the audience to formulate in lieu of your music?

That’s up to the listener. I would hate to cheapen someone’s experience by trying to tell him or her what a song is about when their imagination is far more fascinating. It’s the same as reading a book, then watching its film adaptation: viewing someone else’s take on imagined terrains and scenarios. Some adaptations are good, but they never beat the imagined version.

Actors can transform themselves in the roles they play — I love Willem Dafoe, Tony Leung, and Asano Tadanobu for being able to do that.

I also love how David Bowie and several rap artists have created “personas” for their albums. David Bowie became Ziggy Stardust. Wu-Tang Clan’s RZA became Bobby Digital. I got really interested in the performance aspect of music because I feel like it’s looked down upon — for no good reason — in the independent music scene. But pop, hip-hop and R&B don’t get that kind of criticism. Independent music used to be about underdogs helping each other out. When major labels didn’t pay attention to them, they started their own labels and put out meaningful music while helping friends and creating artist networks. Indie music has changed during the Internet download age. The underdogs have been replaced by self-entitled elitists who try to control the criteria for what’s considered worthwhile. Their music criticism reads like sports commentary: “They need to do this more. They need to do that less.” But rock and roll is meant to be unpredictable and dangerous. And it should stay that way.