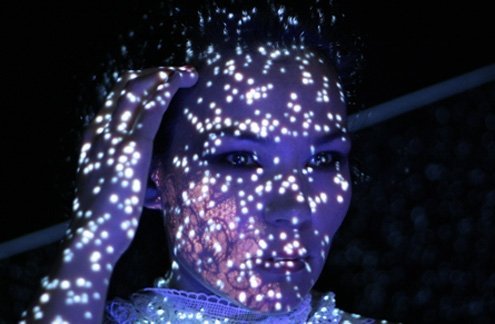 Aïsha Devi's first album under her own name (she previously recorded as Kate Wax) is "Of Mind and Spirit."
F

ew records released so far this fall are as ambitious as Aïsha Devi‘s latest full-length effort, Of Matter and Spirit (Houndstooth), which ironically gets its scope from the artist’s inward retreat into her tangled personal history.

There is much to pick apart in the half-Tibetan, Swiss-based artist’s first album under her birth name (she previously recorded as Kate Wax). Its creation is best explained by the artist herself: “I did this album in a vivid state of observance, dealing with my own emotions, looking for my Nepali father, coping with the death of my grandmother who raised me, and at the same time gaining inner knowledge.”

Of Matter and Spirit is also the title of the final book by her grandfather Charles P. Enz, a theoretical physicist who spent decades studying the properties of sound and amplitudes. Fittingly, Devi is on another plane here, well beyond even the refined postmodern pop of her decade-long Kate Wax recordings released on reputable boutique labels such as Border Community, Mental Groove and Output. That material, not unlike later Björk, felt human and intimate (take the stripped-down “Archetype” or “Green Machine” from 2011’s Dust Collision). For better or worse, the gap between artist and listener was narrow.

In stark contrast, this album’s10 songs contort her voice and rely on heavily processed synthesizers, jarring loops, and endless sonic decays in a conscious effort to blur where woman ends and machine begins. Sounds bleed into one another to create a jumbled and aggressively futuristic headphone geography — perhaps appropriate since Devi has also said the album “is about alchemy, about the search for enlightenment, the inner gold.”

Though the Houndstooth imprint feeds on heady electronic releases — from Akkord and Call Super — Of Matter and Spirit bears a closer kinship to offerings from high-minded pan-global labels such as Night Slugs and Fade to Mind. Artists Fatima Al Qadiri, Egyptrixx, and Girl Unit all come to mind, as do Gang Gang Dance and Arca (via FKA twigs). Each uses brilliant neon synths, unexpected rhythms or rhythmic changes, and radically reconstructed vocals.

“Adera,” which opens Of Matter and Spirit, gets right to it, with an ominous synth, a distant harmony, and, less than a minute in, a taste of the heaviness to come, when a thunderous bass drum kicks in on the low end. It sounds vast and must surely be remarkable to hear live. As a warm-up to the whole of the record, it makes perfect sense. Nuance isn’t the name of the game.

“Mazdâ” features a relatively conventional beat and a pitched-up vocal that Devi occasionally deploys to great effect. The distorted guitar and side-chained beat of “Anatomy of Light” also stands out. “O.M.A.” has an industrial bent to it, with a sample of what sounds like a sword pulled from a scabbard. Its vocal is unusually clear and it may very well be the highlight.

You can’t accuse Devi of shortchanging the listener — each track runs at least two and a half minutes and most run about four or five. Closing things out, the bright loop of “The Saviour on Spilled Blood” takes a pitched-down vocal to the album’s last 10 seconds before an abrupt ending, which leaves you thinking she’s not even close to finished.

This can only be a good thing. Aïsha Devi may not yet be the most recognizable name in electronic music’s more forward-thinking circles, but with Of Matter and Spirit, she’s made a record that demonstrates she still has a lot to say, even when the words aren’t clear. You can feel what she feels. That says it all.