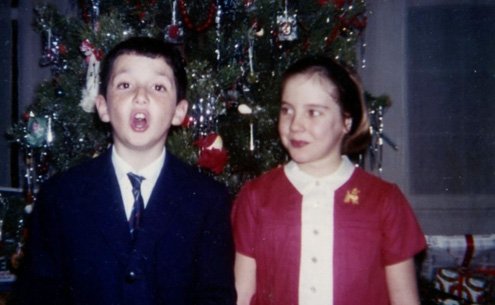 Once the angels were up, they cavorted. As did others.
I

n December 1963 came the great Christmas tree crisis. It had a prelude, however: the missing angels.

Every year my mother patiently placed her handmade angels in a box following the festivities so they could enjoy a year of beauty sleep as well as life in the cottony box, which no doubt included gossip and manicures (there were 12 angels, and 12 angels tend to talk).

But the box, placed in the corner of the attic where the giant kangaroo of my youth governed (while not sleeping), was nowhere to be found. Had the kangaroo, Griffin, made off with the angels in an early crime of passion, or simply to demonstrate his dismay at having been relegated to the upstairs of old cuddly things? Griffin gave no answer, preferring sleep, and the mystery went unsolved for a day until the maid Mozelle explained she’d struck up a friendship with the angels and placed them in the basement where she was busy preening them for Christmas.

All was well, or as well as it could be — the house was still sullen a few weeks after the assassination of John F. Kennedy — until the time came for my annual tree trek with my father.

My father was a bald late middle-aged intellectual who’d never had a driver’s license. He compensated for his failure to drive with a driving intellect and luminousness of ideas that left most living creatures in his wake. I didn’t mind that he didn’t drive since it allowed us to take a Yellow Cab to the tree “forest,” a seller on the fringes of town, and take that same cab back, allowing me to ask the driver, in this case Mr. Smith, if he’d ever by chance driven to a planet. He hadn’t. He had once taken a client to Baltimore, not as impressive as Jupiter but acceptable.

But when Mr. Smith pulled into the tree-seller’s lot a terrible sight came clear: there were no trees. None. The seller, a hunched man called Griffin (who looked nothing like my kangaroo) explained he’d had few trees and there’d been a rush. Maybe next week.

But next week was far too late. The angels had already made appointments. More to the point, we’d driven many miles on a cold day. Griffin suggested another seller, this one even further out of the fringes of the city. I applauded. I wanted Jupiter, or barring that Baltimore.

We headed for a place called Mount Airy, with mostly squat houses with an infant-like highway that ran beside the brassy neon gleam of liquor stores.

But even the Airy-man was bereft. Suddenly Mt. Smith grew skeptical (it had been two hours) and my father turned stormy. He’d reach the point of no return, which is to say a willingness to go home without a tree. Mr. Smith and my father barked at each other.

That was when Airy-Man emerged from his hut — a trailer park hitch — and told us all to follow him. We did for what seemed like blocks and blocks. I expected Baltimore at any moment, but instead we ended up in clay-paved parking lot with another trailer — Airy-Man’s friend — and a single stunted tree, perhaps five-foot tall. It seemed lonely if not on the verge of tears. My father and Mr. Smith shook their head: too small. But I intervened, something I’d never done before, not in the presence of my father. I became what he later called an advocate. I advocated for the tree and the need to save it, as well as give the angels a nest. I advocated fiercely, as if all hinged on my success. I advocated and advocated never once knowing what advocating meant. Well, said Airy-Man, this is it: you decide.

My father eventually consented, handed over a modest bill, and Mr. Smith went cab to get his Yellow Cab. He tied the infant tree to the roof and we began the trek home.

By the time we made it half-way back, dusk had come, and with heavy winds, and with those winds, just before getting home, came great goblets of snow.

It was night when we arrived. Where had we been, my mother asked, angels lined up in their boxes, preening.

My father said nothing.

But it might have well have been Jupiter on that December night in 1963.