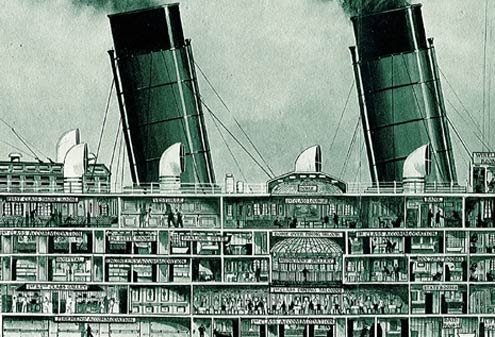 She was afraid of planes so he booked her on liners.
M

y depressive, imperfect father was a little-things man. He moved mountains without boasts. Seeing me enjoy a trip (to London, say), he’d stray silently from our hotel room to extend it. When I began packing he’d stop me, he’d added a day. It’s thrilling when sadness goes away suddenly. You gasp, as if in love.

He did the same for my mother. She was afraid of planes so he booked her on liners. He ensured she got the deck she wanted, the cabin she knew, the second sitting at dinner at the nicest restaurant where elegant waiters laid the prettiest silver and no children lingered to bray. He arranged summers in Amalfi Coast villas. The things he knew she wanted, pendants or perfume, he bought and left waiting in her hundred-drawer dressing room. Pleasing he did well.

I mention this because a 50-year-old letter from my mother that recently emerged from a heap of relics. It explained, or tried, why she’d left, and why my family — we were just three — stopped being one winter in 1965. “Your father does the big gestures,” said the letter, “but he knows very about the little ones. Love is the little gestures.”

The letter was the first of many she sent, along with post cards of places and circus animals, as the estrangement grew permanent. “Take the best from your father,” she wrote.

Emphasizing the importance of the best while worrying about the worst — a kind of confidential extremism — is a priority among those who can longer monitor the in-between, which is where most life occurs. There’s no blaming my mother: She found solace in the Rome distance.

Their breakup fascinated me — appropriately enough for a skilled social scientist. That I was 11, wore thick glasses and had no published work was faintly annoying. Why, I wondered, were the “bigger” things emphasized by my father incompatible with the “little” needs to which my mother referred, albeit cryptically? Why did my mother wantonly reverse the real order of things, put little ahead of big?

What could be better than an attentive companion who made life easier, simpler, more attractive and entertaining? What obscure loving shorthand was better than a better cabin, or a longer vacation? Wasn’t kindness the truest love — maybe even love itself?

As my pre-teen brain elaborated the meaning of endearment, inescapable conclusions dawned. An ice cream sundae — offered unexpectedly — was certainly the equal, sweet-to-sweet, of a declaration of undying love. A sundae was both pendant and perfume. Its giving summed up most known bigness.

In my world, the conferring of affection through the tangible was the surest form of intimacy. That both the thing and the act of giving had little permanence, and no promise beyond sudden happiness, never occurred to me. The darkly feminine poetry of such complication was outside my reach.

So I lived for years with my father. He bought ice cream, prolonged vacations, and arranged Christmas gifts that I shook with glee before breaking. If, as Fitzgerald wrote, personality is an unbroken series of successful gestures, then my father’s gestures, while not always wise or fully shaped, were persistently larger-than-life. Expression was the only script he knew well.

But as I grew beside him I also saw the future of my character, which in turn introduced me to my mother’s objections. My father was a man of brilliance and charity, of goodness and ferocity. But he was also, aside from his son, absolutely alone. Intimacy, to him, was the dismemberment of aptitude. Vulnerability, which is the centerpiece of intimacy, unhinged self-possession. So he limited himself to intellectual confidences, compensating for doubt with gestures. To some, gestures are oxygen bereft of air. I know. My mother gasped.

In March 1941 the writer Thomas Merton wrote to Time Magazine about James Joyce. He disliked Time, he wrote, but “I am glad there is someone on Time who has the sense and charity to recognize to recognize the best writer of the century … and one of the unhappiest men.”

Merton, spiritual seclusion at his fingertips, got it right for the ages, albeit between the lines. Best is not met across the field by worst any more than the opposite of big is always little. There are no idyllic pairings. Co-existence depends instead on making peace with a harvest of in-betweens. Best and unhappiest can be of one soul and one time, with no drug strong enough to dissolve them.

When you know this, as my father did, you are left to repair the sadness of others, which is in part your own, or of your own making. This is how you repair the remains of one day, hoping to earn one more, which will include its own gesture, until life runs out of them.