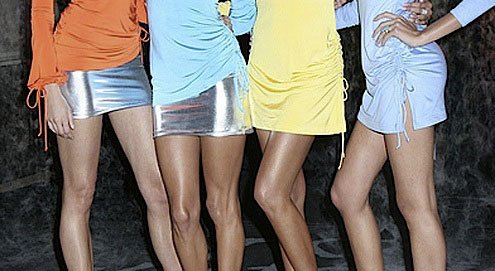 fter years of speculation I’ve finally learned the truth. Do not be alarmed when you read this. Victoria’s Secret is not what you think it is.

Not in a million years.

You think that’s a girl you’re looking at? Think again.

That is not a girl, that is not a bra, at least not the way you think; that is Syrian intelligence.

In the bra is an agent. In that panty is a spy. In that strategic beauty mark is a tracking device. That model, the one you think is winking at you, she has a digital camera in her retina.

Turn the page now, go ahead: Right there, see that, that … shape … in the corner? That, my friend, is a heat-seeking nipple.

And yes, the world is a dangerous place.

I have the documents.

That catalogue? The one with dresses, and garters, and undergarments and little slips; ha! That is a Syrian codebook.

Trust me, I work in the White House. I’m among the men who know, the ones who make the big decisions, the ones who get it right. The ones sworn to uphold the upholdable.

Victoria is not Victoria. Victoria is really a sister. Ahmed’s sister. So you could say it’s Ahmed’s Secret.

But it’s not a secret anymore so you could say it’s Ahmed Exposed.

Victoria’s Secret? Give me a break.

Ahmed Exposed was born in Damascus in 1945 and ran a retail export business (bulky kitchen tiles) until he fell under the influence of Bathers, who are like Baathists but far worse. The Bathers formed a bingo parlor to amuse the British who were once easily amused. This parlor was run by Ahmed’s sister, Victoria Exposed. While Ahmed skimmed the proceeds from the register, Victoria seduced a colonel, provoking a civil war that led to the birth of modern Syria.

All this is common knowledge among White House experts.

It was Victoria who said to Ahmed and the Bathers, “Let’s keep this a Secret.”

And it was Ahmed who answered, “And eventually, a catalogue!”

The Bathers loved the idea. They said, “Once a state, sometimes sexy, always a catalogue!”

Later, when the Bathers took full charge, they sought to control first the region, then the world.

But before that they asked Ahmed, “How do we do the bit about the world?”

Ahmed Exposed was promptly made a brigadier general in the Syrian Intelligence Bathers Group – SIBAG.

He told the Bathers committee, “Let us distract the West, then we can take The Lebanon!”

“With heat-seeking nipples,” Ahmed told them (this is taken textually from the Defense Department document 47K/778, titled, “The Strategic Ploys Employed by The Man Known as Ahmed in the Contextual Designs of the Middle East, Which is Near the Orient, Cradle of Many Bad Things We Struggle to Understand.”)

“Give the West nipples, undergarments, and evidence of rogue navels and The Lebanon is yours,” Ahmed told ranking Bathers in a Damascus steam room known as “Droom.”

Victoria was quickly tasked to do this, using the catalogue, which the Bathers screened for spelling errors.

Victoria, posing as Evelyn Wow, traveled to the West to recruit small and large models who were then examined by the Bathers, equipped with (honing and homing and homemaking) devices, and sent out to tamper with pheromones.

In the White House, these are known as Models of Mass Destruction (MMDs).

Evelyn Wow, known also by her assume names, including Ew, Vicky, Jihad, and Hot Marcia, produces the catalogue at a fake health spa and perfume factory located near the Bekka Valley. There, models that cannot be imported are built to specifications provided by secular Islamists and the more committed Bathers.

The so-called “Bekkies” are considered by far the most ruthless of the MMDs. The ones that speak are deployed in The Lebanon, Iraq, and the United States. Most are trained in Partial Arts. Their designer panties (DPs) are hand-made by eager Bathers. Some panties explode in bedrooms or kennels. Others expand alarmingly without advance warning.

Ahmed has called panties, “The key to ultimate victory.”

Ahmed and Evelyn also opened a restaurant in New York City called “Ahmed and Evelyn’s,” the name meticulously chosen to foil Homeland Security. They also founded a subversive group known as the Hard Rock Café. Little is known about the café, though the sinister significance of the words “hard” and “rock” is gradually becoming clear to White House geologists.

At this point in time – and pay attention now – all we can say for sure is that we’re sure most undergarments are risky. Handle them cautiously.

Do the same with the catalogue, which contains lascivious Syrian proper nouns, including “Christmas.”

These are national security concerns. These are radicals, not bras. These are enemies, not nipples. These beauty marks work for Syrian Bathers.

But also know this:

Exposed nipples are scurrilous, even evil.

The name Evelyn is ugly.

The Lebanon deserves a piece of something, perhaps mind.

Look, don’t touch, is what the White House advises. And we’ve dealt with such crises before. Remember that man Saddam? He sold chocolate condoms to the French. We warned him. Now look.