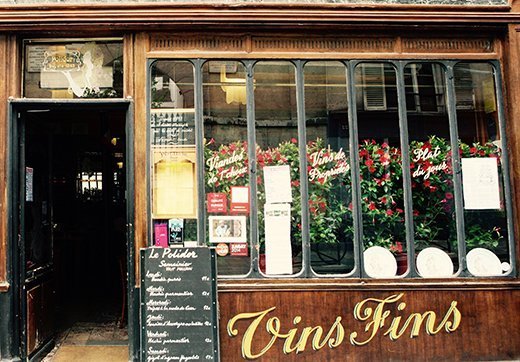 Bistro food is a Paris hallmark, but it can soon become banal.
T

he first time my travel companion had French fries in Paris, she looked at me wide-eyed and exclaimed, “These are the best French fries I have ever eaten!”

We had just made the climb to the dome of the Basilica Sacre Coeur, which gave us a beautiful view of the city. We were hungry and thirsty so we stopped at the first place along our path, which happened to be a touristy café in the shadow of the basilica, with red-and-white tablecloths and a prix fixe menu of basic bistro fare.

I don’t even remember what else we ate that late October day. I do remember washing it all down with a beer before we continued our spiral trek down the hill, stopping to look at clothes in the fashionable boutiques along the way.

Dining in Paris can turn mundane if you look no further than the bistros, corner tabacs, and sidewalk caèes that conveniently dot the city. It can be tedious. Even the waiters and waitresses have a sameness about them — so many starched white shirts and pressed black pants.

At bistros, waiters and waitresses have a sameness about them — so many starched white shirts and pressed black pants.

You also discover quickly that the bread served at most sidewalk bistros is a bit stale, and served without butter. Many places stick to traditional, if not clichéd, stock-in-trade menus: steak frites, coq au vin, moules molinaire, salade nicoise. The waitstaff love pushing the entrecote when sometimes all you want is a croquet monsieur and a beer. My travel companion was quick to notice this though it was her first trip to Paris.

We had a cassoulet at La Factoire Saint-Amour near Pere Lachaise Cemetery, our first day in the city. After a long walk through the Musee D’Orsay, we rested our heels at the Brasserie Les Deux Palais across from the Palais de Justice before attending a vespers concert at Notre Dame. We had a hearty meal of menu standards – French onion soup, quiche, salad.

Later that evening, we ate at Le Petit Pont on Rue de Bucherie. The atmosphere was memorable, with French and Russian gangsters casing the joint, bodyguards hovering over their bosses, and a chanteuse in a pixie haircut belting out French pop tunes from a bygone era. It was a place where the waiters ignored you unless you spoke French.

On our third day in the city, my companion remarked that while we had eaten some satisfying meals, none had been remarkable. She had her heart set on some fantastic five-course dinner at a three-star restaurant, and all we’d eaten was bistro food, the quotidian fast food of Parisian life.

This was her first Parisian visit, and she wanted something special, something fitting to the occasion.

So, after some research on le Google, we settled on a place near Montmartre, Le Potager du Pere Thierry. It was highly rated with an intriguing farm-to-table menu.

But when we arrived, this quaint but cramped restaurant on Rue des Trois Freres was packed. The owner recommended their sister restaurant up the same street, La Vache et Le Cuisinier.

At bistros, waiters and waitresses have a sameness about them — so many starched white shirts and pressed black pants.

The moment we stepped through the door, we were enveloped in the sound of clinking glasses and lively banter and intoxicated by the heady aromas coming from the kitchen. The hostess and waitress couldn’t have been nicer.

We settled into a table near the back of the restaurant and poured over the menu. So many mouth-watering options. I decided on the lamb. My friend chose the quail. We washed it all down with an exquisite Bordeaux. We finished off with crème brûlée and chocolat fondant.

Walking around outside, taking in the lovely Montmartre fall evening, my companion took a deep breath and sighed with satisfaction.

“It all looks so French!” she said with great delight. But some things, apparently, one can never get in Paris.

We were walking around Le Marais after our Italian dinner and thought it would be nice to have dessert. We came upon a fondue place with a stone-walled grotto downstairs.

Our waiter led us to a small table, but when we explained to the stuffy, Gallic server that we merely wanted dessert, a look of sheer horror crossed his pinched features. “It is not possible,” he said, spitting the words out in a haughty tone. “This is for dinner, only.”

“But you have dessert on the menu,” I said. Look, chocolat fondue.

Crestfallen, slightly embarrassed, and very disappointed, we got up from our table, walked up the stairs leading out of the grotto, and pushed out into the night air amid the hustling and bustling tourists.

“Ah, Paris,” my companion said, suddenly a seasoned and weary traveler. “So typical.”