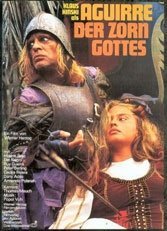 German director Werner Herzog never met a madman he didn’t like. But of all his deliciously unhinged film leads, Klaus Kinski as 16th century conquistador Lope de Aguirre is probably the most amusing. Not only does Aguirre aspire to marry his daughter (she’s dead, but he’s too moonstruck to notice) and father “the purest dynasty,” he also wants to chop his traitors into 198 little pieces, a precise number from such a prolifically careless man.

Aguirre lusts for Peru’s gold, and the natives promise him that he’ll find it in fabled El Dorado, somewhere along the thrashing Huallaga River. Since his goals come not long after Spanish invaders cut the Incan Empire off at the knees, the natives are hardly friendly.

Aguirre, like any megalomaniac, doesn’t get it. He screams at horses, evil-eyes a cheerful pan piper, and controls his fellow explorers through violence. But power amounts to little when poison arrows are killing off everyone worth controlling. The living remain ignorant to their fate.

Only Inez (Helena Rojo), the only woman in the group and the mistress of a deposed rival, accepts her jungle prison sentence. She calmly wanders off into the trees and no one seems to care. The mongrel conquistadores are too preoccupied licking salt from a native settlement they’ve just burned to the ground.

Herzog isn’t much for camera tricks but here he goes for hypnotism. Enshrouding fog, molasses-slow shots, and the broodingly ethereal Popol Vuh score provoke dreams. When Aguirre emerges as the last man standing on his monkey-infested raft, it’s evident that he, too, has been fevered with Herzog’s delusions.

Kinski’s public image was that of an actor-demon hybrid, and his behavior on the film’s set was no exception. He famously near-decapitated a co-star with his sword. Later, when Kinski snarled that he was fleeing the set for good, Herzog told him he’d shoot Kinski — and then himself — before he’d allow him to ruin the film. Now there’s a madman.