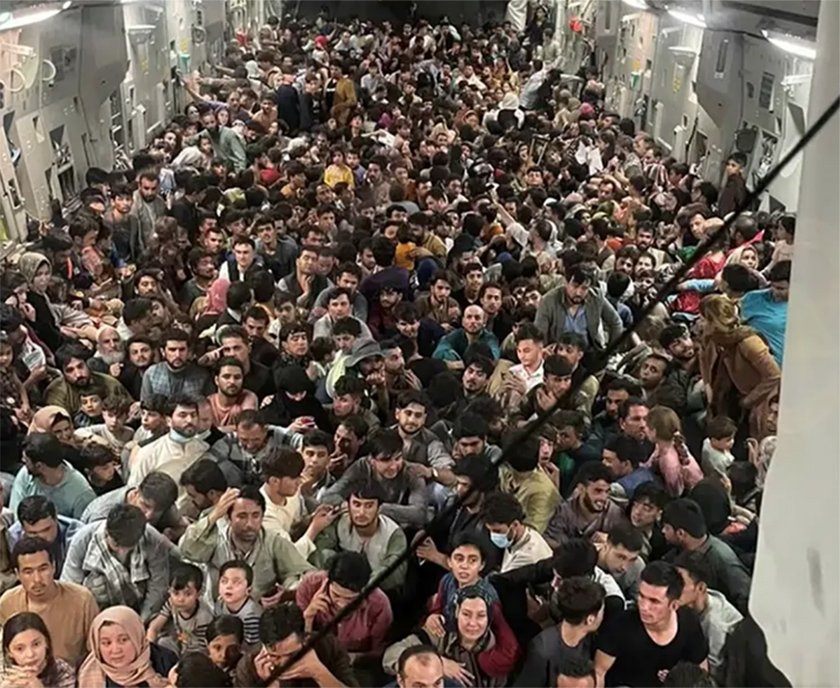 Painfully few were the number of Afghans able to successfully board U.S. cargo planes to escape Kabul.
F

requent readers of this column may have noticed that I never personalize them in any way, preferring to instead stay focused on policies, history, and analysis. A wise mentor taught me long ago that a good foreign policy columnist never uses the words “I” or “me” in their articles, for it distracts readers from the main focus. I have assiduously adhered to that advice for many years. As you can see, though, I am breaking the rule quite liberally today. Not because I am eschewing the journalistic standards that I respect. But because in this column, I am setting aside the focus on policy and analysis and indeed getting personal. And this is because I am incredibly saddened by the tragedy unfolding in Afghanistan.

You could argue until you are blue about whether President Joseph Biden’s decision to withdraw all U.S. troops from Afghanistan is right or wrong. Or you can engage in a self-serving round of “I told you so” remarks about what will happen when the troops leave. You can even pontificate about what you think this all means for U.S. national security and for Afghanistan’s future. There will be plenty of time for all that. 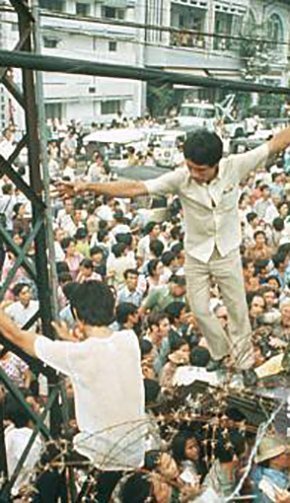 South Vietnamese stormed the U.S. Embassy compound by the thousands in 1974 after the fall of Saigon, but few made it out.

But right now, the images of people terrified and fleeing, literally clinging to the wheel wells of a U.S. Air Force cargo plane, are heart-breaking. And it is the people that deserve our attention right now.

I have had the good fortune of visiting Afghanistan on two occasions. I also once visited an Afghan refugee camp in northwest Pakistan. Most people would not describe a trip to Afghanistan as “good fortune”, but I really did view it that way. Even more so when I returned because I was so richly rewarded. On none of my visits did I get to spend any really appreciable time with actual Afghans, for the security situation was always too dire and as a visiting U.S. government official, no chances could be taken. Even so, on each trip, I fell more and more in love with the country and its people. This was easy to do because there is so much to love about Afghanistan —­ the stunning landscapes, the rich history, and the warm and embracing culture. But above all, it’s the people. The people are what make Afghanistan what it is. And throughout this 20-year war, as well as more than four decades of continual warfare, the people are the ones who have shown amazing grit, resilience, and optimism. So much so that anyone who visits can’t help but come away inspired.

My first visit came in January 2008, as a junior officer in the State Department, filling in for a senior advisor who was temporarily away. I was a jumble of sensations when I was given the assignment of accompanying my boss there — nervousness, excitement, eagerness, and yes, a little bit of fear. This would be my first trip to an active war zone and I had no idea what to expect. Little did I know what an experience I was in for.

I still remember the awe and wonder I felt as the flight descended into Kabul — the very same airport that was recently the scene of such chaos — and I first breathed the crisp, mountainous Kabuli air. Even from my first breaths, I was already taken with the country. The embassy met our delegation on the tarmac and whisked us away. Things may have been relatively peaceful at that time but it was still a place where anything could happen. The entire drive to the embassy I sat with my forehead glued to the window of the armored car, like a kid watching snow fall for the first time. I was fascinated and disappointed all at the same time — fascinated at the everyday scene of local Afghans unfolding before me, and disappointed that I couldn’t get out of the car.

The next morning, we took a helic=opter to Asadabad and Jalalabad, two cities in eastern Afghanistan, to check on a couple of provincial reconstruction teams and to meet face-to-face with local Afghan leaders. High-ranking American officials like my boss didn’t come to provincial capitals very often so his arrival in each city was met with great fanfare, local residents gathering from all around. And here is where I first saw the grit and determination that I soon came to associate with Afghans all over.

All we really need is security. All we need is the space and opportunity to live our lives.

In each instance, we heard the same message: All we really need is security. All we need is the space and opportunity to live our lives. We can take care of ourselves if others would just stop fighting over our land. And we know that things are going to get better in the future because we have no other choice. It was a wonder to me how people living in a warzone, in provinces that were on the brink of failure, could be so optimistic and resilient.

On the way back to Kabul, the helicopter flew low and evasively over the mountain landscape. As a result, I got plenty of opportunities for a good look at what was arrayed below. Since I was young, I had dreamed of seeing the Hindu Kush mountains. And now here they were, splayed out before me, like someone had come through and individually pinched each plot of land into a perfect mound. And they were amazing. Breathtaking and stunning. Colorful, majestic, and imposing. In all my life, before or since, I have never seen landscapes of such beauty. As we whirred along, one thought kept filling my head — just how much would people pay for a helicopter ride over the Hindu Kush if there wasn’t a darned civil war going on down below? The economic and tourist possibilities for Afghanistan were endless, if only we could let them blossom.

I had the same thoughts about the Afghan people when I visited the refugee camp the next year. Again, I had never been to a refugee camp and wasn’t sure what to expect. And again, I left with an unshakeable faith in the optimism of the Afghan people. Although I only got to meet with a select few, and our conversation was muted by the hot airless tent in which we were sitting, what I heard was again inspiring. These people had just left their homes, dodged active warfare, and walked dozens of kilometers to reach this camp. Yet, still they didn’t complain. In fact, they talked only about one day going home and resuming their lives. They were sure it would happen one day and that was all they wanted from the United States. We will take care of ourselves, they said. Just let us go home. Again, the resilience. The determination. The optimism. These people literally had nothing. Yet, somehow, they also had everything.

The mountains were splayed out before me, like someone had pinched each plot of land into a perfect mound.

The second trip to Afghanistan came a few years later, in 2016. As I returned to Kabul, I was amazed at how much the security situation had deteriorated. Whereas in 2008 we could drive on the streets of Kabul and climbed into the helicopter only to visit other cities, this time there was no driving. Everywhere we went, even within Kabul, we flew. I was overcome by sadness. How could we have spent the past eight years fighting in this country and be in a worse spot than before? What are we even doing here? It didn’t make sense to me.

It made even less sense that the only Afghans I got to meet had to pass through security and be brought into the U.S. compound. The security situation was so fraught that meeting outside the Green Zone was deemed too dangerous. But again, after meeting them, I was awed. While we were holed up in a secure compound surrounded by concrete and barbed wire, they were the ones going out, facing down the danger, and taking steps to rebuild their country. And as before, they were counting on the United States for security. Even still, that was all they wanted. The peace and security to live their lives.

And so as I watch the images and read the stories coming out of Afghanistan now after the U.S. withdrawal, I am again filled with sadness. These people had asked only one thing from us and they had counted on us. They had trusted us. And I can’t help but feel that we in some way let them down. Yes, it is their country and they have to take charge of it. And yes, their own government and military also let them down in a most spectacular manner. But do we not also bear some responsibility for what has happened? Whatever you think about the policies or the wisdom of the withdrawal, I think you would have to admit that the answer is yes.

But even as I despair for the Afghan people and what may lie ahead for them, I also take solace in the fact that they are the very same people that inspired me so much in previous years. They are resilient, they are determined, and they are optimistic. Of this I am sure — whatever may happen, the Afghan people will persevere. They have no other choice.