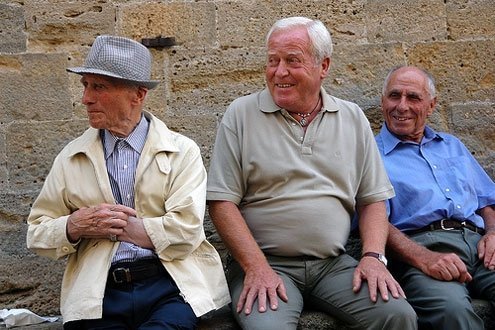 hen it comes to Italian behavior and social norms, stereotypes are the rule. Even the corniest ones seem to pan out.

They really know how to enjoy life. Check.

The women dress impeccably. (I have seen a few cases for the Fashion Police, but we’ll let that go…) Check.

The men are Latin Lovers and charmers. Check and check.

Men may not always be truthful but they do know how to make a lady special and sweep a woman off her feet, or try. Some of these guys are pros, top-notch and smooth.

What I never would have imagined is that some of Italy’s finest charmers are over age 60. Meet Carlo, Gianni and Bruno, my own three corteggiatori are all at least 60.

Here are some snapshots:

First comes Gianni. On Sunday, he parks the cars in the garage of my Rome apartment building. He makes a beeline toward my car every time I walk in. He begins with polite small talk. Greetings come first, and then chitchat about the weather. I’m always cordial. What am I supposed to do? Tell him to beat it?

It’s after these preliminaries that I see the twinkle in his eye. I know what’s coming. “Every time I see you,” he told me once, “you bring back fond memories of my childhood. When I used to read Kipling. You remind me of Kipling.”

I went easy. “Kipling is English,” I told him gently. “I’m American.”

This didn’t faze him. English, American, it was all the same to him. All that mattered was sweeping me off my feet. Did I mention that he’s not sixty-something but over 70?

When I told him I thought the “other” Nicole was prettier, he just laughed it off. She had nothing on me, he insisted. He even invited me to join his Salsa and Meringue dance group. I told him I wasn’t sure my husband Fabio would be up for it.

He even shoots me a wink when I’m walking with Fabio — so long as Fabio is a few steps ahead. He thinks it’s funny; Fabio doesn’t.

Then there’s Bruno the doorman. Though he’s the youngest of the bunch, he’s still older than my father. He constantly asks me about Fabio and makes it a regular habit to inquire about the state of my marriage. Every morning he accompanies me to the elevator door, opening and closing it as a gentleman would.

He also comes equipped with his own brand of seduction. He compliments my clothing. “The color you’re wearing today really brings out the colors of your eyes.”

But my eyes are brown.

My favorite remark came when I asked him to keep an eye out for a package I was expecting. Not missing a beat, he looked at me and said, “Fai finta che sono io il pacco e portami via con te.” — “Pretend I’m the package and take me away with you.”

Last but not least, and the newest of the bunch is Carlo. He’s a Sicilian retiree who hangs out at my bar. We’ve only recently crossed paths. As I was ordering my cappuccino recently, he opened up the question routine: Where are you from? What do you do?

He told me he’d once dated a former Miss America from Massachusetts. She was madly in love with him of course. His eyes then filled with tears. “I’m getting emotional,” he said. “You’re reminding me of my childhood.”

All this because I’d told him I was American. He bought me breakfast and from that moment on I’ve had to fight him tooth and nail. He insists on buying my breakfast every morning. I even had to work out a pre-paid system at the bar.

So if anyone asks, Fabio’s got competition.