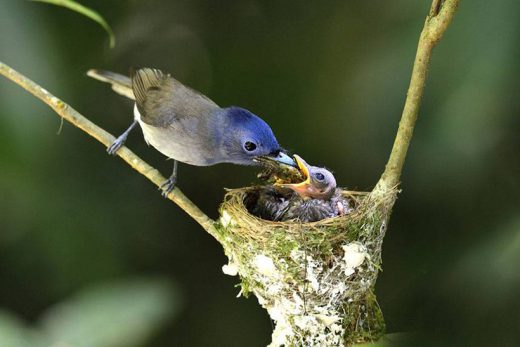 hen the world seems to be out of control and current events stop making sense, I turn to nature to get my bearings. Nature’s purpose is clear. In it, away from the human industry of words, I find a sense of calm and meaning.

That was my perspective until a few days ago, when I discovered a tiny house sparrow lying motionless on the concrete in front of me. The bird was not crippled. It was dead.

I knew this bird. I had seen it the day before. With its fledgling feathers and gaping mouth, it huddled behind a flowerpot in my garden. Birds are not always passing strangers. Some come back.

While I sipped my coffee, I heard it chirping. It seemed sweet at first, but then the restless chirping continued. The bird seemed lost and alone.

Where was its mother? I wondered. Couldn’t she hear her chick’s call? As soon as this thought crossed my mind, a mother sparrow descended from a tree branch and perched nearby, watching the crying chick.

I was relieved. Everything now seemed in order. But the mother flew away soon after and the fledgling continued its wailing cry.

Five minutes passed. Nothing. The cries became more distressed. Finally, the mother reappeared with a morsel of food in her mouth. She offered it to the distressed chick.

Strangely, though, the mother did not drop the food into the infant’s open mouth. She teased the chick instead, offering the morsel only to pull away. Once, twice, three times. Each time, the chick inched upward with anticipation, lifting its head as high as it could. Still, the mother moved the food away. Then she flew away again, leaving the tiny sparrow with nothing.

I was perplexed. I felt helpless. I must do something to help, I thought. My mind drifted back in time, to my seven-year-old self in the Ohio countryside.

Strangely, the mother did not drop the food into the infant’s open mouth. She teased the chick instead.

I remembered once finding a robin chick that reminded me of this bird. It was out of its nest and abandoned. I placed it in a shoebox and filled it with grass. Then, with an eye-dropper, I slipped sweetened milk into its mouth. I stood vigil. All day long I fed the bird. I looked for bugs, and finding none, mashed up bits of oats.

As best I could, I tried to be what I was not, a mother bird. When I thought at last the chick was sleeping, it was actually dead. And the crush of this event broke my heart.

Now, decades later, looking at the plight of this tiny sparrow, I thought it best not to intercede. Let nature, mother nature, take its course. Nature is wise. The mother will surely be back, I told myself.

Later, she again came down from the tree and headed for the chick. This time, the mother had a bit of leaf and placed it in the chick’s gaping mouth. But the instant the fledgling tried to eat it, the mother pulled it away again, continuing her teasing. Then she flew off, leaving her off-spring hungry and weak. The mother never returned.

When I found the bird on the concrete the next morning, all I could think of was how much it had shown its yearning to live. Long and hard, it had cried for help. All for naught.

As I puzzled over what had happened, I was left with more questions than answers. The wisdom and unambiguous purpose I had entrusted to nature was suddenly gone. There may be an order in nature, but to my human eyes, like much else on this chaotic planet, making sense of it doesn’t come with a key.