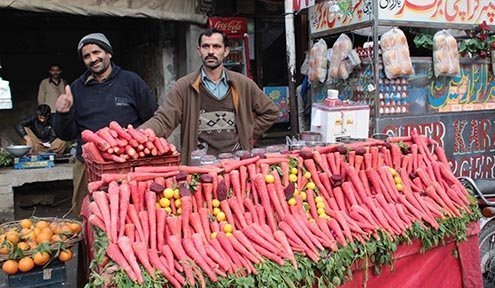 I come for the smell of south Asia — burning vegetation, spices and people whose diets are different from mine…
I

’m looking forward to going back to Pakistan in a few days. When told, most people usually ask why I would go there once, much less several times.

They assume that any “-stan” looks like a Star Wars desert and combines the worst of Saudi Arabia, Iran and wherever it was Genghis Khan came from. News about Pakistani terrorism, corruption and the country’s hyperactive military and secret services hardly help.

Yes, hotels have metal detectors and require pat-downs. Yes, Kalashnikov-toting police have stopped me at one of many checkpoints. Yes, it’s poor. Stereotypes contain kernels of truth.

Yet I keep coming back.

I come for the tingle of uncertainty that rises when I leave the airport and enter a teeming crowd, making me feel like a white beacon. I come for the smell of south Asia — burning vegetation, spices and people whose diets are different from mine. I come for the taxi driver and the blaring local radio, for the rich breeze that blows through the cab as it whisks me away from the nowhere-land smell of international air travel.

I come for the streets. Khyber dust dulls the gaudy paint and baubles of trucks that honk and lumber by. Three-wheeled rickshaws loaded with families of five or bundles tied up with string careen over potholes. Plodding along beside them are donkey carts piled high with oranges, firewood or whatever might sell that day. In Pakistan, as in India, even roadside naps look somehow productive.

I come for the billboards. The beautiful faces of movie stars promote Pakistan’s booming ready-to-wear industry and its imaginative explosion of colors, trouser and headscarf styles. Other billboards hawk local snacks, skin-whitening products or local cell-phone services. Placards for schools whose names rip off Oxbridge and the Ivy League suggest social mobility phrased in the quirky English of the post-British-raj.

I come for the shouts of barefoot boys playing cricket in vacant lots and under flyovers. I come for bits of Britain, for the red brick Victorian train stations and post offices that stand out among the reinforced concrete structures — office blocks, homes, government buildings or barracks — that dominate the developing world’s urban landscape.

I come for to see reminders of Pakistan’s location, at the crossroads of China, India and the Middle East, the nexus of Western hunger for gold, silk and jewels. Crumbling villas still house Pakistan’s dwindling community of Parsis, Persian Zoroastrians who fled to Karachi millennia ago. That light-skinned tall man with military bearing, who wears a Pashtun pancake hat and shouts into his phone may descend from Alexander the Great’s warriors. Those women in the swishing skirts of Rajasthan or burqas of the north may have their roots in the Partition from India in 1947 or ongoing troubles in Afghanistan. Those red minarets and walls are the less famous twins of Delhi’s Red Fort and the Taj Mahal, which Moghuls brought from Central Asia and Mongolia. They also brought gardens, like Lahore’s Shalimar, whose name is symbolic of Oriental luxury.

Pakistan is poor and troubled, but not depressing. With Islamic rules about cleanliness — and none of the wandering animals of Hinduism — Pakistan is less daunting than India. Sea breezes cleanse Karachi’s air. Lahore is Delhi in miniature with less pollution.

I come for Pakistani pride. Statues and billboards honor Muhammad Ali Jinnah, the wily politician who convinced the British to create a country for India’s Muslim minority. Green and white flags are everywhere. In 1941, Karachi had 436,000 residents; in 1961 the number had rise to 1,931,000. Pakistanis know their country is corrupt and flawed. But it’s theirs. They built it.

They also own it. Pakistanis bend over backwards to make things right. The police pointing the Kalashnikovs were apologetic and polite; they wanted to friend us on Facebook. At Lahore’s exquisite Wazir khan mosque, loiterers shouted and demanded refunds from the shoe-check man who overcharged us (a pittance). “What will the foreign ladies think of Pakistan?”

I come because Pakistanis are not resigned or cynical. I come for

The Citizen’s Foundation (TCF), the non-profit organization that introduced me to the country. Founded in 1995 by six Pakistanis worried about the sorry state of public education, it took on greater relevance as Saudi Arabian accelerated efforts to spread fundamentalism through by expanding all-male madrassas. They seduced needy families with free schooling and meals. In response, TCP began building and running top notch, non-religious schools for both girls and boys. Now, more than 1,000 TCF schools educate 150,000 children in the country’s poorest neighborhoods and villages.

At TCF’s annual meeting, I’ll meet dynamic leaders, inspiring teachers and determined alumni who have transformed their lives and villages. At TCF schools, I’ll see children lined up early outside their school’s gate, clamoring for the new school day to begin.

These alone are reasons to come to Pakistan — again and again.