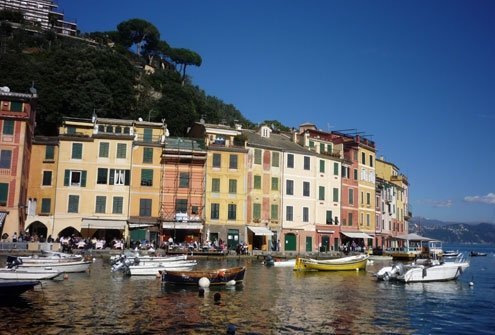 ast year’s autumn and winter rains kept us from hiking from Camogli to Portofino in the crescent-shaped region of Liguria that hugs the sea. Some trails and roads were washed out. Finally, on a bright Saturday in February we parked our car near the train station in Camogli and began the trek.

The hike from Camogli to San Fruttuoso di Capodimonte and Portofino takes five hours. It’s a medium-difficulty walk along the mountainous spines of the Portofino promontory. It ascends and descends about 900 meters in total.

In Camogli, we took Via Cuneo, passed the Carabinieri station, following the road beside a stream. Via Cuneo then merges with Via San Rocco, becoming a cement path. Thirty minutes and a 221 meters later we reached San Rocco, a mountainside village overlooking the Golfo di Paradiso and on the edge of the Parco Naturale Regionale di Portofino.

Mimosa fragrance refreshed the breezy sea air, emitting none of its cut pungency. In San Rocco we paused at the “Maccarini” bakery for focaccia. We then headed for San Rocco’s church, Chiesa di Nostra Signora della Saluta, and the ascending stairs on the right. A Parco di Portofino sign pointed out the San Fruttuoso trail, Via Pietre Strette, marked with a red circle. Arrows also pointed a second trail, Via Passo del Bacio, “Kiss Way,” which dips toward Punta Chiappa and also leads to San Fruttuoso. This second route is spectacular, but as the sign says “molto impegnativo” (“very demanding”) — it’s longer and more difficult than the one we’d chosen, hugging the coastal mountainside with a hang-on-to-a-rope section.

More signs appeared at the top of the stairs. We passed houses and entered woods where the trail became a wide jeep track. Camogli and the Gulf of Paradise were behind and below us. In the distance, Punta Chiappa’s flat, rocky point jutted out to sea. Signs welcomed us into the park.

We climbed Monte Portofino (610-meters). After 45 minutes, at the narrows of Pietre Strette, we looked down on the sprawling town of Santa Margherita Ligure and the wide, blue Gulf of Tigullio. Here, three paths of the park’s 60 kilometers of trails meet and separate again. We followed ours to the right, still marked with a red circle, and entered the “teaching” area of the park. Signs explained plant and animal life, as well as the consistency of the park’s conglomerate rock, a kind of sedimentary rock that resembles cemented debris but is entirely natural.

We began the long, steep zigzag descent to San Fruttuoso. Far below, the Torre Doria (1562) sprouted above Mediterranean Sea pines, rosemary and olive trees. The square battlement tower was built by papal decree under the patronage of 16th-century Genoa Admiral Andrea Doria to defend the abbey and cove against Ottoman pirate attacks.

Torrents of water ran down the hillsides, sliding over smooth rocks and making babbling streams of foam. Gardeners worked in the spring-like weather. One offered me mimosa branches, which I stuffed into the sides of my backpack, a yellow umbrella of flowers following my later steps. We came upon the agririfugio Molino (literally an agricultural refuge), a former mill. Open weekends in good weather and during the summer, the farmhouse kitchen was already preparing for tourists.

We began to descend. Above the cove we saw the long roofs of the ancient Benedictine abbey and the fishermen’s houses of San Fruttuoso di Capodimonte. In the 1700s, pirates seeking fresh water, riches and slaves often mounted raids, leading the monks eventually to flee the abbey. It is now owned by Fondo per l’Ambiente Italiano (FAI), a private, nonprofit foundation dedicated to the protection and restoration of historical, artistic and natural treasures.

We visited the simple church and made our way through the foundation arches of the abbey, which shelter fishing boats. Then, off we went to the beach to picnic of focaccia and oranges, watching fishermen fold their nets. The boat from Camogli arrived, disgorging tourists; many in city shoes, some carrying baby carriages. I wondered where they’d wheel them.

We escaped to the fishermen’s quarters, passed a restaurant and picked up the trail marked with double red dots towards Portofino.

Behind us, a woman backpacker coughed.

My husband Marino turned, “Are you from Milan?”

She nodded and coughed again.

The path is littered with branches, rocks and mud from the heavy rains. Some steps have been washed away. The repairs seem temporary.

The first part of the climb was steep. Looking toward San Fruttuoso, we saw the Torretta, a small tower built for pirate watch. We passed a helicopter landing pad and continued east on the easy, level coastal path to Base 0 (220-meters), a World War I military lookout. Here, couples picnicked amid the scent of pines. In the distance, the arrow-tip-shaped tip of the Portofino promontory dipped into the sea, the blue Mediterranean expanding to the horizon.

Down we went. Near Portofino, our double-red-dot route converged with a red square marked trail. Water trickled along the debris-strewn path.

Portofino has 500 inhabitants but the numbers swell during tourist and sailing season. Its Roman name was Portus Delphini (“dolphin port”). We passed the closed-for-the-season designer shops and headed for the waxing-moon-shaped harbor. This is Calata Marconi, where tall, narrow, fishermen’s houses follow the crescent curve of the port. Water’s edge restaurants were teeming with customers, older men in bright-colored jeans with young women, families with children, and young couples taking photos of one of the most picturesque sea villages in the world. Winter was coming to an end.

The Parco Naturale Regionale di Portofino is about 30 kilometers east of Genoa. Towns on the promontory are connected by boat service. The San Fruttuoso Abbey has tours.