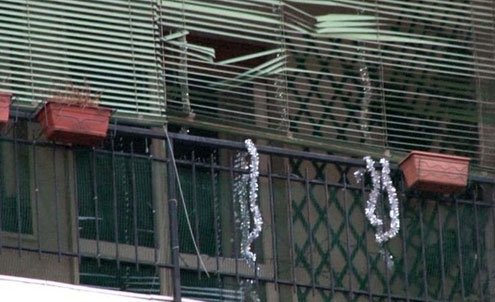 No way to hang on: the end of a man who took a famous photo.
D

estiny can take the shape of a snapshot or a fall from a seven-story building. It makes a sudden imprint only to vanish as swiftly as it came, no one the wiser.

In May 1977, a young Italian photographer is on the streets of Milan as radical students mix with radical workers groups and confront police. Their street demonstrations produce car burnings, bonfires, and finally open warfare. As police chase down scattering protestors, finally knuckling into a slow-moving phalanx, some armed demonstrators do the unthinkable: they open fire.

The photographer is positioned near trolley tracks and on the flanks of one group of fleeing men. He takes a group of pictures. In one, a ski mask and glove-wearing man with a prominent nose is captured taking aim from a half-crouch There are many photographers but only one is on the man’s shooting side. The result is a Robert Capa-like image that goes around the world — all the more so since a policeman is shot and killed in the fracas.

Time, the magazine news authority of its day, soon enters the picture, labeling the Italy of 1977 as country in chaos, its economy shattered, its streets at constant risk of terrorist violence. Tourism drops off. In 1977 alone, some two-dozen government officials, judges, bureaucrats and politicians, are kneecapped by the Red Brigades, while street protests turn violent in Milan, Bologna, Turin and Rome.

The stark photo adds emphasis to global prose. It seems so ferociously non-Italian. Even Italians, forgetting their roots in rural banditry, anarchy, and underworld clans, are convinced such shooters cannot be domestic students or workers. Some insist they are surrogate Communists, militant provocateurs dispatched from the Soviet Union, Bulgaria, Czechoslovakia. The same is said of members of the Red Brigades, who will later kidnap and kill a prime minister: that they cannot be Italian. As it turns out, all of them are.

The year 1977 goes by the name of the gun whose outline is visible in the image, the P-38, the weapon of choice of the German Wermacht and the most widely circulated weapon on the terrorist black market. The dead policeman is Antonio Custra, age 25. His wife is pregnant. The killing generates dramatic coverage, which is made more compelling by the photographs. Another photo, of Custra lying in a pool of blood, is not widely published. The man with the gun is too powerful to ignore.

The photographer is an amateur named Paolo Pedrizetti, in his 20s. He finds himself on Milan’s Via de Amicis by chance, running alongside the turmoil with his camera. He is an architecture student. Few will remember his name but his photos endure. Even radicals of the time enshrine them as a symbol of open resistance (though they are also used by police to find and arrest the shooters).

Whenever pundits and historians mention Italy of the 1960s and 70s the photo of the man with the pointed P-38 is published, keeping its legacy alive.

Thirty-six years later, Pedrezetti, now a 66-year-old practicing architect, is attempting to hang lights on a Christmas setting he has placed on the seventh-floor balcony of his home outside Novara. He uses a ladder to get to the tree display, maneuvering around potted plants and Venetian blinds.

But something happens, and both tree and man tilt. Pedrezziti’s wife leaps up behind him, fearing her husband might fall, and he does, she with him. Husband and wife tumble seven stories to their death eight days before Christmas. This is the end of a man who accidentally framed an infamy that would outlive him.

After the fall, an innocuous photo of twisted blinds and strands of silver lining is released. Unlike the photo the dead man took in 1977, it does not make the rounds.