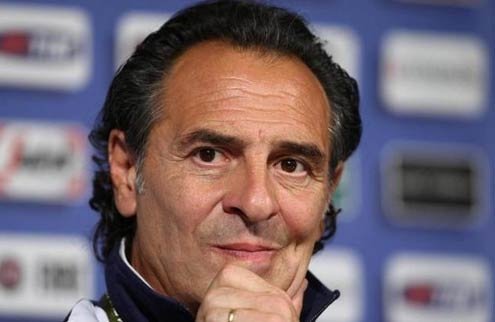 esare Prandelli is right to put his faith in the nation’s young attacking talent as Italy look to build upon last summer’s Euro success at the 2014 World Cup in Brazil.

Few predicted that Prandelli-led Italy would reach the final of Euro 2012. Though the team was rarely dominant — critics will note three drawn games and the 120 minutes against England, eventually decided by a penalty shootout — it imposed its game in matches of increasing importance as the tournament progressed.

After giving Ireland and England tough lessons in the art of possession, gli azzurri entered the semifinal against highly fancied Germany knowing they would have to make more of their chances in front of goal. Cue Mario Balotelli, whose perfectly-taken double secured him a place in Italian folklore and gave his team a chance to contend the final against eventual champions Spain.

I watched the final, a sorry 4-0 defeat, among thousands at Rome’s Circo Massimo. There was suffering but also a sense of gratitude. For the first time since Italy’s 2006 World Cup-winning run, fans had been allowed to ride the emotional roller-coaster of a major competition for its full duration.

Since those heady days in Poland and Ukraine, Italy has continued its rich vein of competitive form. Ten points from four matches has put the Italians in charge of their World Cup group. Commanding 3-1 victories away in Armenia and at home to Denmark were particularly impressive.

Two friendly defeats to England and France, while disappointing, should not be giving the experimenting Prandelli sleepless nights just yet. Italy dictated the proceedings for large periods in both fixtures despite Prandelli’s wise decision to test out players new to the international arena.

The national team needs new rising stars, particularly in attack. Experienced frontmen Antonio Cassano and Antonio Di Natale continue to score at club level and are capable of brilliant, game-changing moments. But neither looked particularly dangerous at Euro 2012, and with a combined age of 65, Prandelli is eager to find promising replacements ahead of Brazil.

Another reality is that the much-touted Balotelli has fallen to fourth-choice striker at Manchester City and has scored only once in the Premier League this season. His place in the national side is by hardly guaranteed since Prandelli is a great believer in meritocracy, selecting players on form. He recalled Balotelli to the starting line-up against France after he scored against Denmark, marking his first start in Italian colors since the Euro final.

The August 2-1 loss to England, a match often dominated by Italy, saw Mattia Destro make a promising Azzurri debut. The 21-year-old AS Roma forward, bought in the summer for €11.5 million from Siena, scored in his only other start, a 2-0 defeat of Malta in September. Poor form has restricted him to short substitute appearances since then, but two goals in his last three games for Roma suggest last season’s goal machine may be rediscovering his touch.

Destro’s Roma teammate, Pablo Daniel Osvaldo, is also emerging. The Argentina-born striker got his debut last autumn but was left off of the Euro squad. Osvaldo has started all of Italy’s four qualifiers this campaign, combining his fine record of seven goals for Roma with three for the national side, including an important double to avoid defeat against second-placed Bulgaria.

Meanwhile, AC Milan marksman Stephan El Shaarawy is also making a strong case for a starting berth, scoring in his national team debut goal against France in November. The 20-year-old, whose father is Egyptian, is Serie A’s leading scorer so far. Expect Prandelli to hand the likes of Sebastian Giovinco, Fabio Quagliarella (both Juventus) and Alberto Gilardino (Bologna) opportunities in attack if they continue to impress for their respective clubs.

Though some insist Serie A’s talent level has significantly dropped off, the league is quietly producing a strong crop of homegrown talents. Zlatan Ibrahimovic departure from AC Milan has opened the door to young Italian stars-in-the-making. Just ask El Shaarawy.

Nor is it much of a coincidence that the national team revival has paralleled that of Juventus, a team that continues to endow Italy’s backbone in goal, defense and midfield.

Crucially, there’s the classy and effective Prandelli, a manager unbiased enough to pick players on merit and capable of at once instilling both passion and unity, making Italy’s individual parts into a very credible whole.