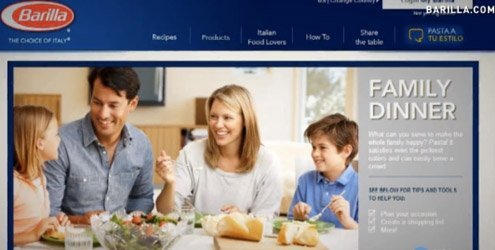 Barilla: Touching off an international firestorm by insisting the family doesn't include gays.
D

It’s a cool rainy weekend in October and I’m with my husband at our house on Lago Maggiore. After dinner, we plan to flop down on the couch and watch Italia’s Got Talent.

“Is pasta al prato okay for dinner?”Alberto asks me.

“‘Lawn spaghetti,’ sure why not?” I reply, and Alberto disappears outside with a pair of scissors. He returns a few minutes later with a handful of rosemary, thyme, mint, basil and a few stalks of lavender, all of which he’s clipped from the garden.

First, he pulls out the large aluminum pasta pot, calculates the water, and sets it to boil. Next, he washes and chops the herbs until they’re fine enough for pesto. He adds coarse sea salt to the now-boiling water and carefully measures out the pasta. He puts the pasta in the boiling water and sets the timer. When it rings, he drains the pasta well and returns it to the pot, sprinkling in the herbs, adding four very ripe cherry tomatoes, four capers, and a couple of tablespoons of tomato paste.

He then heats a half-cup of olive oil in a small pan and pours it over the mix. Finally, he covers the pot and leaves it for a few minutes.

I do my part setting the table: Parmesan, cheese grater, and a plate of fresh olives. I uncork a bottle of Valpolicella and we’re ready for a simple and elegant dinner for two. Now that’s Italian.

Italy offers many kinds and brands of pasta, most of which you can buy fresh at a bakery or the mass produced kind at any supermarket. We usually use Barilla pasta. Barilla is a household name in Italy and North America, since it’s a major exporter. In fact, it was from a Canadian news site that I first learned that the Guido Barilla, the president the company, in answering questions about the importance of eating together as a family, which his company promotes as a theme, that he didn’t intend “family” eating to include gays.

“I would never make a spot with a homosexual family,” Barilla told a talk radio show in late September. “Not out of a lack of respect but because I do not see it like they do. [My idea of] family is a classic family where the woman has a fundamental role.” If gays didn’t like Barilla’s message or how it chose to communicate it, he added, “they can eat another pasta.”

It seemed that Barilla had joined a small bandwagon that already includes the U.S. fast food chain Chick-fil-A, whose CEO Dan Cathy recently went on record as opposing gay marriage. “We are very much supportive of the family — the biblical definition of the family unit,” he said. “We are a family-owned business, a family-led business, and we are married to our first wives.”

While Barilla’s comments may have pleased the upholders of the “traditional family” myth (myth in that there’s no longer one definition of family), they also managed to offend a whole lot of other folks.

Gays represent about 10 percent of any population. To that you have to add their families and those who don’t conform to Barilla’s constricting family profile. It’s a long list that includes single parents and divorced families. From a marketing standpoint that’s a whooping big section of Barilla’s potential market base. I half expected to read that Barilla’s marketing department had committed morning after hari-kari.

But put aside the family issue. Try finding a restaurant in any gay village that doesn’t believe it’s their personal mission to promote pasta and tiramisù. The gay market engine is a powerhouse.

Barilla’s anti-gay message, which would have passed through the Italian media cycle causing only a few small ripples, detonated a bomb when it hit the web. Barilla’s major competitor Buitoni immediately saw an opening. “In the Buitoni home,” it said, “there’s place for everyone.” A Facebook post came up with the slogan: “Pasta for all.” Another rival, Bertolli, also tried capitalizing: “Bertolli welcomes everyone, especially those with an empty stomach.”

Shortly after the sauce hit the fan, Guido Barilla apologized publicly, saying he had a lot to learn about the “evolution of the family” and that he’d meet gay community representatives.

In Bologna, he followed through, meeting with Italian gay leaders and pledged to repair the damage done. I trust his concern for Barilla’s image as a responsible corporate entity is not just for its image abroad but also in Italy.

And while I applaud his desire to learn about the realities of the modern families, I suspect Mr. Barilla, who is the father of a number of children, may discover that even members of his own family don’t necessarily conform to the very narrow model advanced by his company’s commercials. The world is changing, as is the family, and selective blindness helps no one as those changes pick up speed.