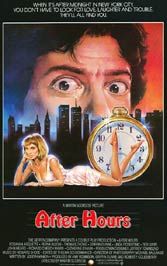 Manic Martin Scorsese is so enamored of his Soho wrong-place, wrong-time premise that he forgets to make a movie. Geek Paul Hackett (Griffin Dunne) finds himself waylaid past midnight in Manhattan’s Weimer-cum-punk downtown bolgias after chasing down a quirky girl named Marcy (Rosanne Arquette).

This shaggy-dog story depends on Dunne, whose “why me?” act loses steam after 30 minutes. Arquette’s clueless Marcia is good fun, particularly when she tells Paul that she lost her virginity to a “Wizard of Oz” freak whose idea of climax was shouting “Surrender Dorothy!” Otherwise it’s all dank streets and black comedy that’s snappy for sure but never grows on you.