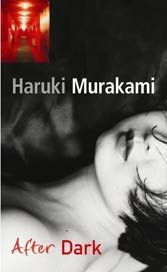 Murakami’s latest novel (assist from the French director Jean-Luc Godard) fidgets in the crawl space between coincidence and the arguments against it. So much so that the narrator, a “high-flying night bird,” is not animate but “pure point of view.”

Nineteen-year-old Mari Asai idles away Tokyo nights while her glamorous sister Ari can’t wake from a protracted, three-month-long sleep (she’s a cross between Sleeping Beauty and Snow White). Mari meets Takahashi, who once dated Ari. Mari and Takahashi are each drawn to the Alphaville Hotel, a hangout for call girls. There, Mari attends to a Chinese prostitute (slave to the mob) who’s been beaten up by a programmer named Shirakawa, who is also a family man.

Murakami binds his characters like avatars in a video game, shadows that may or may not be real in a nighttime city that may or not contain cosmic truths. He reboots his story constantly, attending to its every flicker, suggesting a possibility of cohesion “between sorcery and functionality.” But that’s it. “It’s quite a recent development that human beings have felt easy about going out after dark,” Takahashi tells Mari.

“After Dark” is about virtual bodies working the graveyard shift. They possess memory and inhabit ominous subplots, yes, but even virtual reality requires a jolt. Murakami’s “dream-pieces” are becoming alarmingly predictable. (“Alphaville,” by the way, is the title of Godard’s 1965 totalitarian allegory about a computer-controlled future run by gangsters and devoid of love.)