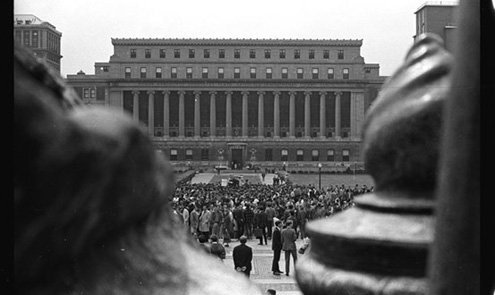 Hours of half-indolent ideological hectoring.
I

miss the long-defunct Columbia Anti-Imperialist League, a rag-tag bunch of loquacious if often dazed college students who insisted they’d fallen out of love with the dehumanizing conduct of Western industrial affairs. The Leaguers didn’t so much embrace Moscow or Marx or even communism as they vocally and sometimes physically resisted the political and institutional status quo.

I occasionally mulled on the fringes of their brassy demonstrations, pondering the meaning of the class system, or simply missing class. The demonstrators had makeshift symbols painted on cardboard placards that they’d set park in gentle rows in front of a local diner following an afternoon of half-indolent ideological hectoring. Next came burgers and conversation that often centered on what constituted an ideal society and whether red ketchup and yellow mustard really existed to collide atop the same burger, never mind the argument over onions.

Quibbling aside, I enjoyed my barking semi-comrades because they seemed convinced of something, and I wasn’t convinced of anything. They talked about historical trends I’d never heard of and debated dialectics over cherry pie. I knew more about pie (tasty) than dialectics, which to me sounded like fancy eyewear.

I bring them up because of the tone and timber emanating from 21st-century American campuses. Politics as ideology is out, ruined by unsavory politicians and further mooted by the lack of alternatives to capitalism. Issue-driven debate is constant but fails to picks at the core of cash-inflected life, by now an iWorld staple. Students are too in debt to consider overturning the system that “inflicted” the privilege of education. Public demonstration is also passé, trumped by online yowling that deactivates the kinds of once-messy street protests that actually annoyed authority and could land the intemperate in jail for a night, no burgers included.

Authority is often insulted but rarely vexed. Leaguers that once occupied campus buildings would these days face rental fees or eviction. Marx and dialectics have been superseded by degrees of self-“ownership” and matters of sexual preferences and choice, topics that (while passionate) fail to tug at the hardware of a society itself. Making room for differing carnal appetites exists only in context of imperialist world’s digestive tract, or so the Leaguers would have thought.

The Leaguers also supported gay and lesbian rights, and denounced sexual abuse, but above all they posited a world less beholden to a narcissistic handiwork framed only by currency and commerce. Leaning on sexual dissent alone risked adolescent caricature. An altered republic would of course invite greater sexual and social tolerance, but only as a piece of the puzzle.

A burger tasted better after challenging the core of the status quo, however naïvely. Playing with the big boys meant reading theory, which made debate with skeptical university administrators (“the establishment”) that much headier. Neither side liked the kind of world the other advertised. Gender (and even race) was the least of it.

Admittedly, there’s never been a moment so rich in debate as the present one, if only the ultra-democratic back-and-forth wasn’t conjugated digitally, the progeny of bytes, the offshoot of incessant but indirect confrontation, social interaction constant but ironically abstract if not anonymous, no burgers and pie in the post-protest mix.

Jets surge through dubiously allied skies to righteously bomb religious extremists that the latest establishment — many the sons and daughters of Leaguers— insists must be extinguished in response to barbaric and unconscionable acts, enough said, no devil’s advocacy kicking around, nobody pass the salt.

And that’s a shame.