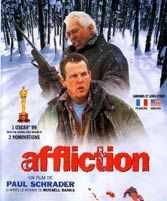 Though suffocating at times, “Affliction” is worthy if only for the bravura of Nick Nolte and James Coburn.

Novelist Russell Banks sets most of his stories in a kind of crushed America where semi-rural characters reckon not with dreams but with demons and flaws.

Here, Nolte is humbled New Hampshire sheriff Wade Whitehouse, an alcoholic, who wants above all to avoid being compared with his spiteful father Glen (Coburn; who won a best supporting actor Oscar).

Glen is terrifying: the perfection of hard-assed, gloating male rage. Whitehouse tries to square himself with his conscience (and with the women in his life) by investigating a hunting accident, leading him to confront his father.

Director Paul Schrader (who wrote Scorsese’s “Taxi Driver” and “Raging Bull”) elicits some of the toughest, most unbearably raw male acting of the 1990s.