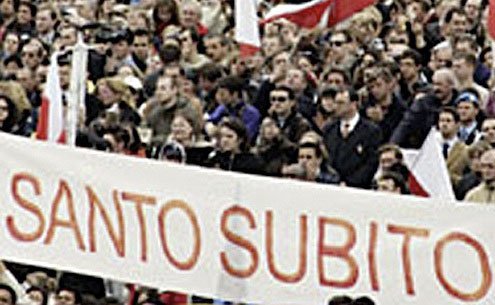 aints are the official celebrities of the Roman Catholic Church. Pope John Paul II sensed their significance and installed a gaggle during his protracted tenure. He roamed the Catholic world in search of would-be superheroes and helped anoint as many as he could to quench the planet’s spiritual thirst and bond temporal to holy. John Paul’s saint-making priorities emphasized the eclectic internationalism he brought to his papacy.

The founder of Opus Dei rose, as did obscure South American missionaries, martyrs of China, Lebanese Maronite monk Youssef Kassab Al-Hardini, and Italian visionary Padre Pio. The pope was so intrigued by Maria Teresa of Calcutta that he waived a variety of protocols to give her wide berth toward beatification, the first step in the canonization process. John Paul’s saint-making machinery was so fruitful that some theologians worried that the immemorial reward risked cheapening.

In a stricter era, saints candidates gathered dust for years, often decades, as arcane elders examined the validity of the claim. The process resembled that of a sports hall of fame: Achievements made an athlete famous but only retirement made him eligible. In Catholic terms, retirement is death. Thus, many waited.

But Karol Wojtyla liked larger-than-life figures and symbols. Fatima fascinated him. He idolized the Black Madonna of Czestochowa, a dark-painted wonder woman with a piercing conscience. Miracles inhabited her history. Over the centuries the Black Madonna froze vandals (they died when striking her image) and repelled Russians bent on invading Poland (troops saw the image and fled.) Wojtyla talked up her wonders whenever he could. She was his morality’s mystical companion.

When Mother Teresa died in 1997, Wojtyla redrew protocol to suit his preference for the spectacular. The Albanian do-gooder bypassed the usual five-year canonization wait period and was beatified in 2003.

Now it is the dead pope who been “fast-tracked” (political jargon the church can hardly like.)

Benedict XVI, Wojtyla’s friend and theological confidant, waited a mere 50 days to initiate the process. At this rate Wojtyla could be beatified by 2006, with canonization in store thereafter.

Though the zeal for elevation is predictable, the absence of dissent is unhealthy. Where is the advocatus diaboli, the devil’s advocate, nominated to argue against the proposal? He may lurk inside the church but is nowhere to be found outside it.

Conformist times make polemics partisan and turn the act of acceptance into a moral imperative. Definitions of heroism have been leveled — particularly since September 2001. Dying under any sort of duress is generally heroic. Coping with physical or emotional illness is heroic. Fame has its own vainglorious heroism. Shrewdness is easily confused with valor.

Promoting heroic entitlement (and making rebellion unpopular) is central to a system of simplified, non-intellectual beliefs. Subtlety is unattractive because it’s slow. Blatant sexuality is the planet’s aggressive appetizer, while more interesting eroticism languishes. Why? The blatant is simpler to promote and visualize. Teasing is quicker than teaching, and more entertaining.

Which is where Pope John Paul fits in bizarrely.

His death had blockbuster impact. The physical decay, up close and personal, was pure soap opera. The funeral, with two million people present, played out in St. Peter’s Square, the National Theater of set pieces. Every aspect of the live production was intrinsically sumptuous.

In agony, the pope was a worldwide star. First he was mute and broken, testament, it was repeated incessantly, to the universality of human suffering. Next he clung to life, with the details of his physiological slippage left to filter down like Last Supper crumbs. By the time he died the drama had been fully scripted, and to some extent manipulated.

While much grief was sincere, John Donne’s poetic expression —“Ask not for whom the bell tolls, it tolls for thee.” — best describes the underbelly of the mourning. Many recognized their own mortality, “thee,” in weary Wojtyla. Others were simply curious, attracted to the communal spectacle.

Among Poles, Wojtla’s death represented the loss off a hero and a patriot, embodying ancient definitions of both. Among devout Catholics, he was pater familia, gone. Among non-religious Westerners, he was an imagined Gandhi, a transcendent knight figure elevated by his own charismatic deeds (and travels) into a perfect source of collective sorrow.

Does sorrow translate into sainthood? Does the pope, on the basis of his deeds, deserve canonization?

From the church standpoint the answer is “yes,” indubitably.

From simple decency’s standpoint the answer is likely the same.

If the devil’s advocate needs rousing it’s not over the case’s merits, but what accelerating it says about how the church’s view of rules and hero-worship.

If you can dramatically adjust sainthood rules to extend the office hours of the church’s dead venerable, why stop there? Why say, as the church does, that some law is natural, and thus inviolable?

Why not reassess female ordination, which would begin to revitalize a church whose sexual positions and advice-giving often depends on definitions of “maleness” that are changing even in the non-industrialized world?

Why not reconsider, or at least debate, positions on birth control and contraception — so that Third World Catholics are spared the unchecked proliferation of AIDS and the production of infants they cannot feed?

Why not convene dialogue — on sexual predilection as well as the perils of rampant consumerism and the immorality of waging war — instead of coolly hewing a purity of dogma that thrives only in the absence of biting conversation?

Why not attempt a different kind of sainthood, one aimed at elevating whole church and not a single good pope? The irony of putting John Paul front-of-the-line for beatification on the grounds that he was globally beloved and fervently committed is that the church he left behind is neither patient nor inclusive.

It wishes to employ the dead Wojtyla as an advertisement for ecumenical compassion and a good will ambassador for international “outreach” — Josef Ratzinger cannot communicate as Wojtyla did. Everything about Wojtyla’s effusive character lends itself persuasively to Vatican product placement. John Paul is a natural for the Catholic Church’s Hall of Fame.

But devil’s advocate point stands: Changing canonization rules to speed up John Paul rise to the theater of the Catholic august gives the impression that other rules might available for review and reflection.

Operating on one chamber of the heart when two more need fixing is alluring because it means one doctor is willing to undertake one procedure. But it’s also misleading. Without all valves fixed, the patient dies.