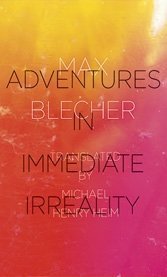 By Max Blecher, translated from the Romanian by Michael Henry Heim

First published in 1936, Max Blecher’s slender rumination is wise beyond years and pages. Here are recollections of small-town Romanian life as told by a youthful narrator who sees objects lording over (if not mocking) their human counterparts. Human reality for him is “marvelous prison” filled with “cheap, indifferent decor” to which he can’t belong because his authentic self is in the thrall of quivering things. “I was a special creation of the mud,” he writes, “a missionary it had sent into this world.” He is, like the sexual act he learns, an impersonal pronoun, an “it.”

Blech’s mental picture — similar in daguerreotype texture only to that of Bruno Schulz — belongs less to the bossy tyranny of surrealism than to a kind of aphrodisiac pessimism. Self-effacing contraction elicits life. As mud, he resists his “oppressive and rational” education, making his “enthusiasm for living in a new light” sweeter still. In his melancholy world, graves “suck” corpses, trees “scoop” parks for homes, drains await quenching rainwater; seemingly impassive things guard their “secretive attitudes.” Humanity, the “common mush,” “gaudy excrescences,” is inverted into insignificance before a grand “succession of objects,” some of which grow tire of “being seen so many times.” Yes, erotic longings tug hard, but even consummation seems like an act at the behest of orifices seeking appropriately theatrical “ornamentation.”

A doctor diagnoses the narrator’s “secret and intimate afflictions” as “paludism,” technically malaria, but translator Michael Henry Heim wisely stays literal, since this “paludism” is a feverish bog of incurable enchantments. “The certitudes I lived by were separated from the world of incertitudes by the flimsiest of membranes.” Blech regards these flimsy membranes as a scientist would a slide, all the while stricken with his “illegal human existence,” ruefully pondering his hands as “pitiful birds chained to my body.” To observe, he seems to say, you must first be in excess.

It’s easy enough to label this sickly Romanian youth (he died in 1937 at age 28) Kafkaesque or Dada-leaning, but neither reference contains his thriving, raging anti-realm in which all is memorably galvanized by the “authentic perfume” of youth. The “strange and senseless adventure of being human” is amazing and terrifying. The “lava of matter” becomes houses, but how? Only wax statues, he decides, are authentic: “They alone flaunted the way they falsified life…” One doesn’t awake from recognizing such falseness. One only sees it, absorbs it, and fades into its folds.