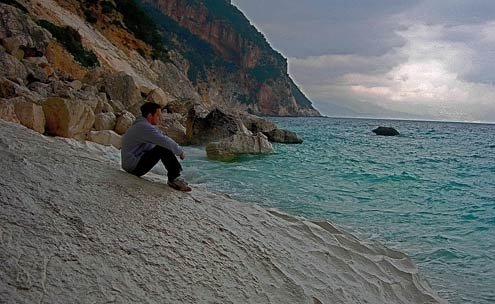 ou hear Gavin before you meet him. The sound of his corduroy pant legs rubbing against each other is loud enough to compete with the Madonna CD blaring over the spinning class he attends. You do your best not to stare as he and his Converse All-Stars stagger into the dumbbell rack, but he’s coming straight towards you, his ponytail following.

“Ay, you’s got a light?” he asks in a thick Scottish brogue. It seems an unlikely question to ask at a gym at 10:30 in the morning, but then again, Gavin seems like the kind of guy you’d expect to find still lingering in the parking lot the day after a Jethro Tull concert, not at Body Sport Palestra. You don’t have time to answer.

“Ha! I’m taking the piss. I’s got one,” he mutters, motioning toward the door.

You don’t usually smoke while working your delts, but when you’re alone in a new city and starving for conversation, you make exceptions. You tell Gavin your story; that you’d arrived in Cagliari a week earlier, have a job teaching English, and will probably return home in six months when your contract is up.

“That’s what I say 15 years ago!” Gavin coughs. “But Sardinia’s like that Eagles song. You’ll see.”

Your first memory of Sardinia is a blackout. In September, 2006, three flights and 30 hours after taking off from Washington, D.C., the AirOne captain readies you for landing at 10:15 p.m., saying that you’ll touch down in Sardinia in 10 minutes. Exhausted, you peer through the double-glass of your window seat from the heavens only to find what looks like the stars below. Rubbing the sleep from your eyes, you survey a horizon of dark emptiness where one glowing village seems as far apart from the next as the constellations. You question your decision to live in Sardinia.

“Up ahead in the distance, I saw a shimmering light. My head grew heavy and my sight grew dim, I had to stop for the night.”

By your third month, you decide that there’s something civil about walking to work and something comforting in sharing a routine with complete strangers. You leave your apartment every day at 11:05 a.m. while Signora Piras, inevitably still in her bathrobe, hangs her unmentionables out to dry. At the corner of Via Azuni and Via Buragna at 11:10, you receive lingering stares from a handful of elders at Bar Inerzia as they sip Ichnusa beer. Climbing Via Manno at 11:16, you pass your favorite street performer whom you call Mustard Mauro because he dons a yellow-colored suit and tie and resembles a bottle of Grey Poupon as he bellows the city’s morning opera aria. You get to work by 11:22, but in a “Groundhog Day” meets “The Truman Show” kind of way, time seems to stand still. You start to feel like you’ve stumbled upon a scripted social experiment that plays out day after day around you, somehow making you feel like it’s all for you.

“Any time of year, you can find it here.”

Your second apartment is tucked into Cagliari’s medieval kernel, Castello. Periodic ant infestations lead to regular toxic spray-downs, which keep your windows open day and night and allows outside life in. Sporadic drumbeats erupt weekly around the Duomo, with parades pounding in unison to commemorate saints you’ve never heard of.

The Cagliaritani keep their cell phone bills to a minimum by shouting. Why call when you can walk a few blocks, stand in a piazza and holler through the open French shutters of a third-storey apartment? If the person isn’t home, a neighbor leans out the balcony, asks the shouter what he wants, and waits for the intended recipient to come home to yell the message to them. You constantly feel up to date on the block’s voicemail. It takes a village, you suppose.

“And still those voices are calling from far away, wake you up in the middle of the night, just to hear them say.”

You’re an instant novelty as an American on an island boasting the lowest percentage of foreign-born residents in Italy. You grow accustomed to hearing people who have never left the island wax authoritatively about America more as an abstract idea than a place: handicapped by immaturity, pregnant with wealth, and brimming with aggression. You learn to nod in agreement as your patience blossoms.

“We are all just prisoners here, of our own device.”

After living in two cities, testing the shocks on your rental car by traveling to impossibly remote pockets of the island and writing a guidebook, you realize that you know more about your adoptive corner of the world than your own home and know it’s time to return.

“I had to find the passage back to the place I was before.”

The day before your flight home, you call Gavin to say goodbye. He says, “Ay, be seeing ya ’round soon.” You ask him how he knows you’ll be coming back. He responds, “Remember, ‘you can check out any time you like, but you can never leave.'”