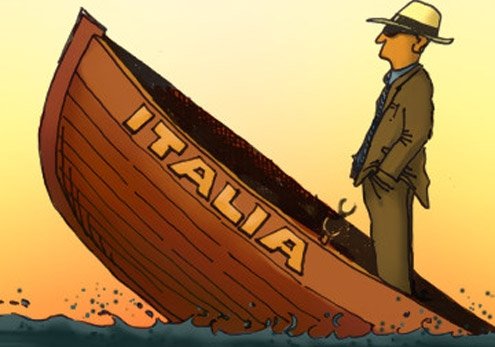 Sinking ship Italy has been a foreign journalistic template for decades, and it doesn't help.
I

’ve been in Italy for 25 years. For 25 years I’ve been reading the same generic “Italy problem” article. It goes something like this:

Gee things are bad in Italy. It is depressed or “underperforming.” Ancient Rome and Renaissance Florence were glorious. Italy is a young country, unified only in the 1860s. Trains once ran on time, but that had a political downside. Recently in someplace off the beaten track (i.e. neither Rome, Milan or Venice), the author enjoyed an incredible meal among beautiful monuments located near ancient ruins.

The country’s woes are all down to bureaucracy, organized crime, nepotism, and a lagging educational system. In highbrow publications, the fault lies with “amoral familism” described by political scientist Edward Banfield (“The Moral Basis of a Backward Society,” 1958). In lowbrow ones, it’s bunga-bunga. Both really get the place down.

Author draws parallels with opera; buffa or tragica, as the case warrants. Politics are complex. What do you expect in the country of Machiavelli? asks the author. But Italians are also a creative lot, the home of Michelangelo, Leonardo da Vinci. Fellini too, which explains a lot. Author knows Italy well, having lived a bit in Florence (which was irrelevant for about five centuries until the appearance of Matteo Renzi, its youngish mayor and the country’s most viable new politician).

Friends of the author, many of whom were probably educated in the U.S. or UK, speak excellent English, and hail from the same international elite as the writer, say it’s all true.

The author quotes an academic, whose association with the illustrious foreign writer gets burnished.

But wait… all is not lost! The author has found an improbable ray of hope; the plucky little high-tech leader from somewhere “unlikely,” i.e., south of Rome.

Below the published report, the editors acknowledge “contribution” of Mario Rossi, a young Italian journalist who should probably have written the “Italy problem” in the first place.

Over time, the “Italy problem” article has varied slightly. Until the 1990s, political inertia was blamed on the “revolving door” governments that lasted from the 1950s to 1990s. Then it was blamed on Silvio Berlusconi. Now it is blamed on the post-Berlusconi vacuum.

All of these points have merit. But they’ve also become a code for easy solutions that tend to trivialize the complex message they’re intended to convey. It is as if those writing about German underperformance following 1990s reunification could somehow hinge their argument on passing references to Kant, Bismarck and 1870s unification, then adding references to Bauhaus, Hitler, Beethoven and cute girls in dirndls serving beer at Oktoberfest.

Does it matter if there’s nothing substantially incorrect in the “Italy problem” article? Especially if an ignorant audience is satisfied by outdated and unchallenged stereotypes, or by hearing what it already thinks it knows?

It matters because journalism deserves better.

It matters because readers outside Italy deserve better. European Central Bank executive board member Joerg Asmussen recently said the fate of the euro “will be decided in Rome.” Flaccid commentary from Italy is not acceptable and details are important. “Organized crime” is not cinematic shootouts in Palermo. It is economic infiltration into northern businesses by the Calabrian ‘ndrangheta, its underworld powerhouse.

Italy may be a “young” as a nation, but that fact matters less than other details, including game-changing compromises made partly as a result of Roman Catholic Church and U.S. foreign policy pressure to limit the postwar influence of the Italian Communist Party, which peaked in the mid-1970s.

Berlusconi may have gutted the political class beginning in the early 1990s, but the political extremism and terrorism of the 1960s and 1970s disgusted, jailed or killed the generation that should have replaced the country’s political gerontocracy.

And it matters because Italy deserves better.

Italy cares deeply what the foreign press says and “Italy problem” articles are front-page news on the home front. Italy’s national identity is simultaneously presumptuous and insecure, like an adolescent’s. And like an adolescent, Italy is overly dependent on the opinions of others.

Accepting and acting on outdated, simplified or misunderstood opinions sends Italy into an echo chamber. Overemphasizing weak growth rates in recent decades causes Italians to lose themselves in navel-gazing and forget how between 1945 and 1985 the country dodged a brewing civil war and pushed a feudal agricultural society into a democratic industrial one in 40 years compared to the 200 it took the rest of Western Europe.

Dwelling on the genius of Leonardo da Vinci just pushes Italians to rest on long-gone laurels. They waste considerable time searching for the innate Italian-ness that made Leonardo da Vinci great, though it was probably a combination of luck — being born in Renaissance Florence — and 10,000 hours of work and study.

Italy could be a better place in many ways. Improvement, if it is to come, requires realistic solutions and policies, which aren’t likely to make an appearance so long as Italy’s own and other countries’ policies depend on analysis steeped in stereotypes and misunderstandings, or both. When information about issues that affect the future of the euro and, by extension, the world economy, is weak and hazy, the approaches to those issues will be equally hobbled.