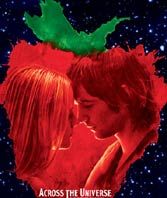 Frida” and “Titus” director Julie Taymor serves up a truly fresh and touching new take on Beatles classics with a musical coming-of-age/love story between a shipyard worker from Liverpool and a privileged East Coast girl headed for the Ivy League. It’s risky business borrowing songs imbued with such personal memories for so many to drive a new narrative, but Taymor pulls it off.

The singing by a cast of mainly unknown actors (cameos by Bono and Joe Cocker aside) is so good it’s shivers-inducing at times, and as fragmented as the story feels at the start, it gains momentum throughout and comes fully together. While the film rates high on the imagination and fun scales, it falters a little in originality. The army conscription scene was just one sequence with heavy shades of Hair. Staleness creeps in with occasional clichés — both cinematic (girl chasing car waving goodbye to lover) and dialogue (“You don’t have to talk about it,” says he; “No, I want to,” insists she). But these minor irritations get swept away by the tenderness of main love story and the impressive talent of the young cast.