Across the River and into the Trees 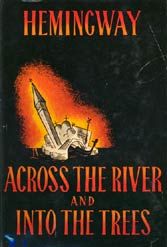 The misfortune of this book is not its mediocrity but Hemingway’s deeply morbid investment in its central character, the lugubrious American Colonel Richard Cantwell who intones “to hell with sorrow” but is sorrow incarnate.

Hemingway chooses Venice as a setting for this gloomy post-war midlife meditation; Harry’s Bar and the Gritti Palace make requisite appearances. But when the ailing colonel, aged “fifty plus one,” starts focusing on Renata, his 19-year-old Italian (“my last and only true love”), reams of self-indulgence kick in. He calls her “Daughter” and the phrase “I love you” is used so often it breaks down under its own weight.

This is Papa’s “Death in Venice: “What I would like to give her is security, which does not exist any more,” says the colonel of Renata. He also wants to give “all my love, which is worthless.” That leaves an obit.