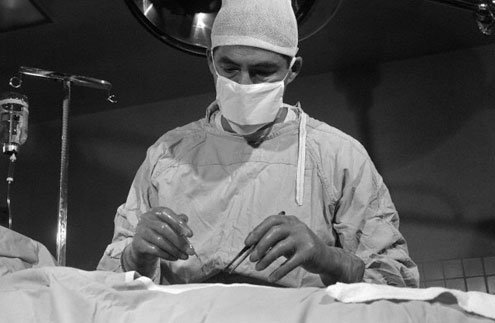 From an eager and dynamic young surgeon to a sick man on a downhill slide.
H

ospitals were the backdrop of my childhood. Dad was a doctor, the old fashioned kind; the kind for whom it was a vocation and a passion, long before the words were debased by overuse.

Dad’s idea of vacation fun was volunteering in hospitals, reconstructing leprosy patients in India or operating on civilians in Vietnam during the Tet Offensive in 1968. When we traveled, Dad escaped from site-seeing to do rounds or watch surgery with a local colleague. He had them in every port; Bombay, Stockholm, Rio de Janeiro, New York or Charlottesville. Like him, these doctors were among the first generation of plastic surgeons, eager young doctors who just after World War II had come from all over the world to East Grinstead, England. There they learned from pioneers Sir Archibald McIndoe and Sir Harold Gillies whose revolutionary techniques reconstructed the faces of airmen badly burned during the war.

Dad’s definition of peace was a hospital at night, where staff whispered and patients found relief in sleep. Accompanying Dad into a hospital was like taking a hunting dog out on a snappy fall day. His step would brisk up; he’d sniff the air. “You never know what might happen,” he’d say, quickened by the prospect of surgical adventure.

“The hospital” was also a morality tale and long-running reality show where compassion was often pitted against anger. Dad railed against the feckless and irresponsible who demanded the same treatment and consumed resources he felt were better spent on the stalwart and upright. He questioned the charity of extreme measures to keep premature or drug-addicted babies in a life that would probably bring them only suffering or cruelty. Dad starred in a drama of conflict with administrators who thought he was weird to let patients choose music to be operated by or to insist that the operating room have windows. He believed relaxed and happy patients healed better. Patients agreed and they adored him. Staff loved working with a man who could command respect but also share corny jokes.

But it all changed when I was 20. Dad had a stroke that left him paralyzed at age 62. When I visited him in the hospital, I found a patient, not an eager bird dog. I found an old, suddenly white-haired man. Dad’s eyes were dull. His jaw was slack. His six-foot frame had shrunk and his voice had flattened. I fainted.

Younger doctors taking care of him treated him like a chalkboard that had been erased. They enunciated carefully, confusing his blank expression with a blank mind. Nurses became chummy as if his withered limbs were a license for vulgar familiarity. Dad acquiesced. Mom and I bristled.

Dad’s stroke happened near Christmas. Mom and I carried on, trying to believe nothing had changed. In between making Christmas cookies and rehearsing with the choir, we went to the hospital to feed Dad.

Night after night, Mom and I would spoon mushy broccoli and unidentifiable cutlets into Dad’s mouth in the rehab dining room that was supposed to acclimate patients to home life. Forlorn tinsel hung from the fluorescent lights. Canned Christmas music mixed with the rattle of flimsy silverware on plastic trays. Dad slouched over his tray. While he chewed stolidly, his good hand wadded his bread spasmodically, while the other fell dead into his lap. He stared blankly ahead into a void.

There was one other patient in the room. He was severely burned and a paraplegic. His arms were tattooed and he wore a leather jacket with cutoff sleeves. His family avoided looking at us. His eating pattern was a kind of drawn-out spasm. It began with the tensing of his body and the snapping back of his head. He’d then pull his mouth out of shape and stretch the scarred skin of his burned eye. The cycle ended with a long, grievous moan.

Dad had been this man’s doctor until the day of his stroke. The case had strained his compassion. The man, drunk at the time, had been in a motorcycle accident so spectacular that we heard the crash across the river from our house. He had been drag racing and another man had died.

Mom and I had an unspoken pact not to discuss these hospital dinners. We didn’t dare be anything but brave. But we looked at our watches constantly and we sighed with relief as we wearily sat down to our own dinner at a table laid with china and candles.

There was much to suffer about. But what we suffered most was Dad’s absence. We read to him, decorated his room with Christmas lights, and brought him homemade cookies — anything to get a sign, to get a reaction. But he remained blank.

Then, during one dinner session, Dad seemed to focus on his former patient. He stopped his automatic chewing. Mom’s hand hung in the air with a loaded fork. Dad stared as the man’s body tensed into its cycle, finishing with the moan. Then Dad’s face suddenly convulsed into a grimace. Fire in his eyes, his good hand struck out at his tray. Silverware clattered to the floor. He yelled something unintelligible at the man and then sank back into his wheelchair, exhausted. Mom and I pushed him back to his room and drove silently home.

Dad eventually walked, and talked. He was heroic. But his vocation was gone and nothing was ever the same.

I had put aside these scenes long ago until last week, when I woke up as a patient in a hospital. It was night. Around me monitors blinked, and my roommate breathed behind the curtain. I heard nurses whispering outside.

It was peaceful and I thought of Dad.

Then from far away, a moan pierced the quiet, and the dining room of 30 years ago suddenly reappeared. I finally let myself cry and cry and cry, for Dad, for Mom and for me.