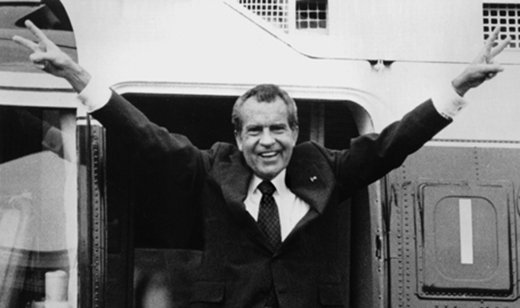 Richard Nixon after his resignation in August 1974: strange jubilation.
M

ake enemies in the business world, and the vendettas and reprisals likely to arise later will play out in rooms remote from public view. Make enemies in public view, among bureaucrats, agencies, political allies turned disposable, and the backlash will eventually crest on your doorstep. Add insults and vindictiveness to the enemy-making mix, and the backlash, when it comes (and it will), stands to acquire ugliness on par with the man who pried open the first vat of deforming acid.

Richard Nixon’s red-baiting a penchant for political hatefulness —he won a Senate seat by portraying his adversary as a Communist — opened an unfixable chasm with the press, which gradually concluded he would do anything and everything to rise in his party, and in national visibility. He became an urban punching bag in three cities with influential dailies: Los Angeles, Washington and New York. When he lost a California gubernatorial bid in 1962, he bitterly told the press: “You don’t have Nixon to kick around any more, because, gentlemen, this is my last press conference.”

But it wasn’t and they would. Nixon won the presidency in tumultuous 1968.

What the victory did not diminish was his paranoia, and when the Watergate scandal broke, the press once again had its favorite target in its crosshairs. “I am not a crook,” he insisted, to then resign in disgrace in 1974.

Stalwart advocates of the institutions he has sullied since taking office are amassing legal weapons that point to reprisal. Ousted insiders, less bold, nonetheless whisper more loudly, less afraid than they once were of the boss’s thumbs-down wrath.

Ironically, his tampering with the FBI and other agencies wasn’t even necessary. He won a re-election bid in 1972 with ease.

But Nixon had made too many enemies, and when, finally aligned thanks to the scandal, they chopped him to pieces. He got what was coming, and mercilessly (until his replacement pardoned him, a scandal in its own right).

Now another president is walking down Nixon Lane. His ability to make enemies is far more impressive than even his predecessors. So is his willingness to lie, which can seem at times like an eagerness. A child of the business world, and its entertainment offspring, he is more like an impresario than a president, and impresarios notoriously doubled the size of the crowds attending events in which they managed to promote their shows and increase revenue. No lie was too shameless, no exaggeration too untoward. Board-room bluster superseded political gamesmanship to become a form of systemic mockery applied with neurotic fervor to real or perceived enemies.

While Nixon dug into self-loathing and depression, hissing at all around him, his 21st century copycat rolls his insecurities into a daily capsule of venom, lashing out, at the falsifying press, at those who criticize him, at traitors who won’t pledge allegiance.

But now, slowly, this sitting president is facing Nixonian waters. Stalwart advocates of the institutions he has sullied since taking office are amassing legal weapons that point to reprisal. Compromised attorneys have defected and now tell unsavory tales. Ousted insiders, less bold, nonetheless whisper more loudly, less afraid than they once were of the boss’s thumbs-down wrath.

People made trivial if not humiliated in the course of this president’s scorched earth ascent to office are beginning to sense they might just be vindicated if they knock on the right door. This is a serious turn of events for an easily-rattled leader who faces real wounding for the first time.

The “Washington Post” first got a whiff of the scope of the Watergate conspiracy in late 1972, but it took 18 months before Nixon found himself in serious political trouble. He denied and denied until insiders revealed information that could no longer be denied, led alone casually swatted away as partisan. This similarly amoral president may soon find himself in the same bind.

Yet the old saying holds: the most dangerous animal is the one that’s wounded. Revelers beware. The tunnel is long, and one light, lacking a second, third and fourth, does nothing to make the other side any more visible.