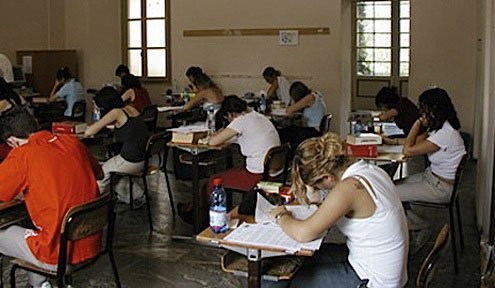 Cheating is considered solidale and charitable, acting in a spirit of public good.
L

ast week my son came home from middle school fuming after he got a test back. He was not angry because of the disappointing grade; he already knew that he had not done his best that day. Anyhow, his grade was still the second highest in the class. The highest had gone to a girl who usually scraped by. But this time she had “gotten a hold of” the test questions before the exam. As if this was not bad enough, the professoressa made her an example for the class: “Look!” she said, “this is what you can achieve if you just study harder!”

Cheating is rampant at all levels in Italian education. In university, many theses are “ghostwritten.” During middle and high school interrogazioni (oral exams) students build walls of books on their desks, behind which they hide cheat sheets. Students alter the teacher’s register, thereby postponing their turn for interrogation or marking it as passed.

Helpful desk mates whisper answers. The book wall works for written exams too. Students write facts and formulas on their hands. Accomplices position test papers for easy copying. Cheat sheets are attached to knapsacks and then hidden under desks for consultation when a pencil “falls” to the floor. Outright theft is common. In my son’s case, the exam was taken from the teacher’s handbag.

These are primitive, easily-thwarted techniques. What if the teachers simply walked around the classroom, the high-tech solution employed by the only teacher that my son’s classmates don’t cheat with? How about asking students to clear their desks? Or store knapsacks at the back of the room? Why are tests lingering in teachers’ handbags or around school enough in advance to permit photocopying and distribution?

Cheating is considered solidale and charitable, acting in a spirit of public good. It sustains the much-vaunted Italian tradition of resisting mindless authority (except when it’s a nasty government, but we won’t go there). Stolen tests are shared. Telling on a cheater is unthinkable. Not participating is seen as anti-social and mean-spirited towards the feckless or weak. Otherwise upstanding parents pass on proven techniques from their schooldays. Teachers were students once and you wonder if their blindness is also a form of complicity.

Preparing cheat sheets in miniscule writing demands the same effort as studying. Other tricks take time that, applied to study, might guarantee an equally good and certainly honest result. The penalty for getting caught on an exam is only a grade of insufficiente, the same you would get if you didn’t study at all. So why bother?

Despite tougher penalties and social stigma, cheating is rising in the United States. The competitive college that I went to has seen a frightening rise in honor code violations. Students evidently believe that if they don’t get the best grades, go to the best schools, get the best job, they will be cut out of the meaningful ranks of society. They are convinced enough to risk expulsion and shame, which still happen and still matter. (For laughs, just Google “Ted Kennedy Harvard cheating.”) In Italy, things other than academic achievement are more important for access to social and economic status. Indeed many successful Italians take perverse pride in having succeeded in life despite performing badly in school.

So what is the point of Italian cheating? If it gets you little and its victims are only goody-goodies such as my son, does it matter?

Of course it does. It has broader implications that I hardly need spell out.

The Italians I asked about cheating were well able to grasp the broader implications. And although they believe scholastic cheating is emblematic and symptomatic of Italy’s most obvious defects, many have trouble condemning it. Almost all had participated as abettors or perpetrators. It was part of school-day high-jinks. Several emphasized the positive aspects for my son. His experience taught him that life is unfair; that it isn’t all about merit. Cheating prepares young people for disappointment, they say. It creates a healthy sense of skepticism and prepares them for the caprices of fortune. Cheating may be a young Italian’s first lesson that life can be random and hard.

This is college admission season in the United States. All over the country, students have struggled to improve their grades and SAT scores. They have done community service and played sports. With fewer places than qualified students, odds are blind to the best results and intentions. In a poignant New York Times op-ed piece, Kenyon College’s director of admissions apologized to all the qualified young women whose colleges of choice could not take them. A college rejection letter may be a young American’s first lesson that life can be random and hard.

Two systems, same lesson. You decide which you prefer.