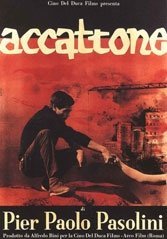 Acattone is a failed father and husband. He’s also a lousy pimp who blames the women in his life for his sorry state. Then he meets Stella (Franca Pasut), a naïve innocent he intends to recruit, at least at first. But she can’t follow through, and he’s unable to get closer to her. His inner conflict leads him to seek redemption in honest work. In the end, his gangster routine makes change impossible and Accattone falls back into a lethal abyss.

True to his cinematic heritage, Pasolini — who wrote and directed — packed the film with neorealist ingredients. He cast non-professional actors, including Citti, and used mostly outdoor locations as backdrops for Accatone’s existential struggles. But in transforming a lower class figure into a Christ-like anti-hero he went a step further. The poetry and religious allegory rejected by neo-realists permeates this work, which Pasolini intended as a fuller interpretation of man’s spiritual nature. Accattone isn’t necessarily likeable but the jagged and unsentimental presentation of his available options provides moments of extraordinary truth and beauty.

The film was the first to received an Italian VM18 (“18 and older”) rating, part of Italy’s attempt to safeguard its international image after a series of films about its postwar struggles. Citti, plucked out of nowhere, went on to a long film career that eventually landed him a small role in “The Godfather III.”