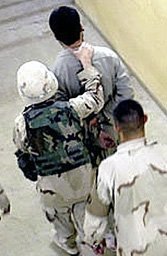 How do you spell defeat? Abu Ghraib.
W

hile the newspaper phrase “eager mayhem” may best portray the mood of American guards when they staged and photographed soft-core scrums at the expense of helpless, bawling inmates at the Abu Ghraib prison in Iraq, it does not clarify them.

The New York Times refers to “twisted joviality not authorized by anyone in the chain of command and with no connection to any interrogations.”

Cruelty certainly wears different period-masks, as does malice. But when the powerful are left alone with the powerless, rules on hold, the results range predictably from bad to dreadful. Hannah Arendt, scholar of the Holocaust, coined the banality of evil – extermination was awful, and awfully routine. Seymour M. Hersh, chronicling the My Lai massacre, described the 1968 slaughter of Vietnamese civilians by GIs as hypnotically systematic.

Civility suspends its own disbelief when grown men and women, trained in violence, dehumanize foes and make them into fantasy objects. A child may kick a pet at age 10 to watch the wounding, to sample adulthood, and to taste the arrogance of living outside punishment. But small crimes of opportunity, to the impressionable, can become bigger ones if rationalized.

Official America (not unwittingly) has permitted post-September 11 anxieties to drift unchecked toward vindictiveness and vengefulness, sentiments as yet unrelieved by military catharsis. Grief was morphed into anger, anger into revenge, and revenge into brawn.

But while Washington’s brawn-managers expect the rule of law to hold down vendetta, fighters are less picky. At worst, they are mayhem’s agents. And a part of the mayhem, in Iraq, is cultural, racial, religious and sexual.

Another part, however, concerns the exasperating nature of the conflict. American troops fare badly in wars with fuzzy objectives and Washington agendas (nation-building instead of nation-taking). Commanded to beat the Nazi military in World War II, American forces performed straightforwardly in retaking occupied territory. Beginning in Korea, where territory and enemy was alien, the same generation of soldiers (many downtrodden and vulgar) began misbehaving. The pattern was repeated in Vietnam, with its jungles of anguish. Iraq’s urban desolation is providing similar moral disconnection.

In Korea, Vietnam and Iraq troops were sent far from home into hostile populations that hardly welcomed them. The Iraq war, moreover, freed Saddam Hussein prisoners with little distinction between the political and the criminal.

Not surprisingly, the current mix is volatile on both sides.

The Iraq generation of American troops is different from its predecessors. Self-involved but inarticulate, high-tech but lowbrow, this group has been raised in the most publicly realistic and pornographically rich pop culture in modern history. It has also learned to photograph itself constantly, which in this case proved the undoing of the jailors.

“If somebody wanted to plan a clash of civilizations, this is how they’d do it,” said the American senator Diane Feinstein. “These pictures play into every stereotype of America that Arabs have: America as debauched, America as hypocrites.”

I’m not so sure Feinstein’s right, because what the images really show is America as feeble.

What happened at Abu Ghraib usually occurs when elements of a military force sense they can’t win, or that nothing worth winning exists. Frustration rises, breaks its banks, and rage turns childlike, pitiless – kicking the animal. I can’t imagine militant Islamic leaders (who know sadism) failing to notice the dejection in these images: cruel mischief carried out by bored occupiers bereft of triumph, strategy, and stuck where they’d rather not be – running Saddam Hussein’s former super-prison. The horror.

No beheading satisfies as much as seeing an adroit enemy progressively demoralized.

He’ll “get to the bottom” of the incidents, he says, as if to do so is like probing a plane crash or a chemical accident, then firing the culpable.

But the events provide their own bottom. They can be deplored and perhaps partially redressed, but not rationally dissected. Unrepressed rage is what makes organized violence work. Generals, colonels and majors exist to focus the fight, control the mayhem, and arrange the twisted joviality. The trinity remains war’s essence, its gasoline.

Someone is having a bad war, and losing it.