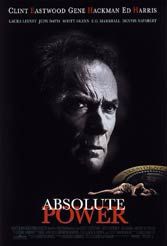 During a heist, veteran jewel thief Luther Whitney (Clint Eastwood) sees the president of the United States (Gene Hackman) murder a lover. What to do? Forget it? Not quite. Whitney’s estranged daughter is a prosecutor and Eastwood uses the connection to charge his story.

Eastwood’s skills as an actor-director are strongest when he develops a family around his narrative. As Whitney starts unraveling a murder cover-up, he also gets to ties that bind, giving this (Clinton-bashing) thriller its purpose and depth. Laura Linney as Whitney’s daughter, Ed Harris as a probing cop, and venerable E.G. Marshall as a duped presidential supporter, all shine. If you don’t like Eastwood, stay away; he’s always the father figure to his own movies.