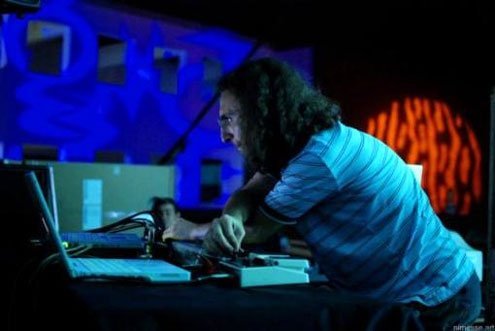 Fabio Orsi, "Stand Before Me, Oh My Soul" (Preservation).
T

here is a bumper crop of great albums to sort through this spring, but one name in particular stands out to me: Fabio Orsi. Orsi, from Carosino, near Taranto, has a new album entitled Stand Before Me, Oh My Soul (Preservation). Since his 2005 debut, the young Orsi has generated a healthy helping of field recordings from the Apulian countryside and looping drones to fill up shelves of self-released CD-Rs, cassettes, and split LPs.

This album, however, bears no resemblance to scratchy homemade samples or half-baked ideas. The haze that “Naked Trance” emerges complete and indicates Orsi is falling in line with the recent vogue among independent musicians (chillwave and weed-rap in particular) of cloaking their music in a fog. That’s the only amateur aspect about it.

This has nothing to do with the erosion of memory, though — this is more about eternity. Songs never really begin or end, they simple fade in and out. It’s nothing new for Orsi. He’s been doing this for as long as he’s been recording, perhaps best exemplified in his collaboration with fellow Italian sensation Valerio Cosi on 2009’s Thoughts Melt in the Air

The difference between that and other earlier efforts and Stand Before Me, Oh My Soul is that this packs an immediate punch. They might be overmodulated loops at their core, but listen to a song like “Full Metal Flat” and hear the aggression, the rockist origins. Orsi has long insisted that he is a composer, but this is the best example of his music actually sounding composed. It is an absolute must.

Another absolute must is by the Brooklyn trio The Psychic Paramount. Funny story, actually: Once upon a time, The American movie critic Lauren Jurgensen sent a ZIP file to me of various musical odds’n’sods. One of them was The Psychic Paramount’s “Megatherion,” from 2005’s Gamelan Into the Mink Supernatural. It nearly blew my speakers out at a sensible volume. I’ve been an avid fan ever since.

It hasn’t been easy, with a collection of loose ends in 2006 the only signs of life in six years. That changes with their latest release, II (No Quarter). Delayed since last spring, II is exactly the kind of psychedelic noise-rock album one would hope from the group. Are they the best band on earth?

I don’t know, I haven’t seen them. A few of you might have when they toured France and Italy in 2002, but live dates are so sparse and random (they played Spain and Poland last year) that the albums are all the unlucky rest of us have to go on. Good thing this slays.

“Intro / Sp” wastes no time exploding to life. It’s like walking into a tornado and being carried away by harsh guitar strums, barely controllable bass, and a crashing drum kit. There are no lyrics for any of these songs because this band doesn’t need them: It backs you into a corner with its music alone and demands a response.

Songs like “DDB” or “N6” assault ears repeatedly, but the pleasure of hearing melodies creep above the noise, then disappear again in an echo of reverb and delay, is undeniable. The Psychic Paramount is a band that believes payoffs are possible every second of every song. That they don’t make it easy to find those payoffs is all the more rewarding in the long run.

On the opposite end of the spectrum is another Brooklyn resident, Julianna Barwick. The experimental vocalist brings a lightness of voice and a deftness of touch to her latest full-length, The Magic Place (Asthmatic Kitty).

This magic place, as it turns out, is floating in the airy abyss of Pure Moods commercials from the early 1990s. New age was a strange fad resulting from confusion in where electronic music was headed at the time. Celtic vocals, whispery synthesizers and trip-hop percussion patterns eventually found their comfort zone with desperate housewives and have been largely ignored by everyone else ever since.

Barwick helps legitimize the genre with an album that feels as pure in mood as any bird-brained Enigma greatest hits collection. Her vocals are really something to behold here, but not for anything she’s saying — like other artists who use the voice as an instrument rather than a means of communication, Barwick’s language is made-up. You can hear enunciations, but not of anything in particular.

Which is fine, of course. Barwick’s ethereal voice crosses wires with guitars and synths in a melodically rich and vocally resonant album that is easy on the ears and warm to the touch. The feeling of a sun-kissed jewel abounds, and there is no better time than spring to hear it.