About a boy, and the city around him 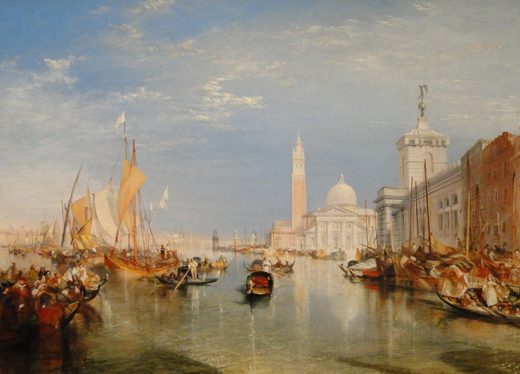 An 1834 view of Venice by English painter William Turner. Few cities in the world have remained so untouched over centuries.
N

othing can prepare a first-time visitor to Venice for what they’re about to see — a canal-spliced city with no cars, narrow winding, windswept streets, and a transit system dependent on chugging diesel-powered boats known as vaporetti.

You can read and watch videos all you want, but everyone experiences this city’s magical strangeness in their own way.

My own story also included a lost boy. But first, some sightseeing.

Starting on July 4, the day I arrived, I buried myself in this strange realm of boats, docks, and bridges small and large. I savored the passage of time. I watched as the July sunlight reflected the waters of the Grand Canal and its smaller tributaries. I watched birds hover overhead, moving in sync with the often-packed boats. On boats and on land, I overheard the multi-lingual chatter around me. One day, sitting at a cafe, I heard noises that suggested subtle urgency. A group of Spanish-speakers were trying to communicate with a sobbing little boy. I studied Spanish for years (a huge help in Italy) and soon understood that the boy was lost and the group had taken him under its wing.

But their Spanish seemed to have no effect on him. He just stared at them blankly. The café owner emerged and tried Italian. More blank stares. It soon became a game of musical languages, including English, but nothing seemed to work. He just sat there without saying a word.

Inside, I felt the ache of sympathy. Not knowing Italian, I’d been getting by with a mix of English and fluent Spanish, tossing in an occasional buongiorno and grazie.

I decided to try to talk to the boy myself, using the only other language I knew: Hebrew.

He looked directly into my eyes. He’d clearly understood me. It seemed to me something of a miracle. The boy, six, had somehow become separated from his parents. It seemed to me a little astonishing, if not miraculous, that I was the only person who could understand him, the only one able to speak his language.

I learned Hebrew as a child and then spent a year living in Israel as an adult.

Locals called the police, and soon I was with the boy on a police boat headed for the Venetian Ghetto district, where there was a greater chance of finding other Hebrew speakers. The word “ghetto” actually originated in Venice in the 16th century. At the time, Jews were confined to living there and restricted by a daily curfew. After World War II, the area was reclaimed as a place to celebrate Jewish culture and tradition. There are two kosher restaurants, a bakery, and several lovely artists’ studios. It’s a must-see for those interested in learning about history and experiencing contemporary Venetian Jewish life.

The police made the right call. But though the boy was now able to communicate freely, no one was able to shed light on his parents.

I felt badly for him. I knew how easy it was to feel lost and scared while traveling. But I was an adult; the boy was only six.

Soon, though, one of the police officers brought word that a Hebrew-speaking couple had come forward to report a lost child. The news met a collective sigh of relief.

The officers asked me if I wanted to accompany the boy. I didn’t think twice. I sat beside him and reassured him he would soon be reunited with his parents. At the station, his father thanked me, and my job was done.

I went to Venice to see the sights but also got to ride in a police motorboat. How many people can say that? Thanks to a lost boy, Venice made me feel at home. It also reminded me that home isn’t just a place. It’s a language.