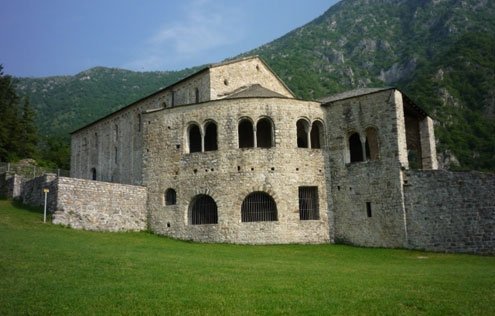 he Abbazia di San Pietro al Monte di Civate is a 1,200-year-old abbey that sits in a dell halfway up Monte Cornizzolo overlooking the town of Civate near Lombardy’s Lake Como district. It is a jewel of early Romanesque, Lombardy architecture decorated with 11th-century frescoes and stuccoes. A well-trodden, well-conserved trail climbing 382 meters leads to the site in about an hour and a quarter.

Today, Marino and I will hike a ring route to visit the abbey (662-meters) while enjoying the early June sunshine. In an hour we’ve driven highway SS36 from Milan north towards Lecco, exited at Oggiono/Civate, and then followed Via Cerscera St. to a parking lot (280-meters).

Now, from the lot we take a walkway between houses, follow the road up to a cement lane on the left and then pass the sign Pozzo. Keeping right, we continue on narrow Via del Pozzo through the hamlet of Pozzo (360-meters), past the B&B/trattoria “Cascina dell’Oro” to a fountain. Here red, white and yellow signs point to myriad paths tended to by Civate’s volunteer walking association, Società Escursionisti di Civate (SEC).

We take path n. 10 along a flagstone lane to the right. Soon we see the first of three low, grass-roofed, stone huts, which were once a bad weather refuge for fieldworkers. One of the three limestone outcrops of the Corni di Canzo looms above.

Soon we enter the woods of the Valle dell’Oro, a valley not of gold but of water — oris means source in Latin.

“Strong, eh? It’s wild allium,” Marino answers. “The woods are full of it.”

After an hour, we get a glimpse of low stone walls on the ridge above. We reach a gateway. Ahead is the oratorio of San Benedetto, an elegant chapel dedicated to St. Benedict that pilgrims’ once used for prayers and meditation. Large stone stairs beside the chapel attract our attention. They lead to a stunning, semicircular atrium surrounding the front of the abbey’s San Pietro church. Bifora-style windows create a play of light. It’s a place to reflect before entering the church or while looking across to Monte Barro or down to Civate on sparkling Annone Lake.

The church hasn’t opened. Marino and I drink water spouting from a nearby rock. We stretch out on the lawn — much like pilgrims did 1,000 years ago — feeling protected and welcomed in the enclosure of low walls. I wonder what those times were like and how the abbey came to be.

Its origins are lost but one legend is that Adelchi, son of the last Lombard king Desiderio (756-774 AD), was struck blind while hunting. When a mountain hermit healed him, Desiderio rewarded the miracle by building the church in 722 AD. He dedicated it to St. Peter and St. Paul as a Benedictine monastery.

But the abbey buildings and its frescoes date to the 11th-century. After Desiderio came Charlemagne. Under his nephew, the abbey was transformed into a basilica, monastery and fortress. Lombardy was contested between Byzantines and Franks. In 1162, Civate’s abbot sided with Holy Roman Emperor Frederick I (Barbarossa 1122-1190 AD) against Milan’s bishop. When Milan won, the victor dismantled the monastery, leaving almost no traces. Fortunately, the abbey’s church and chapel were untouched.

Today, as we rest, hikers pass by and families fill the lawn. Volunteers from Civate open the church.

Inside, Carolingian frescoes and stuccoes with Ottonian and pre-Romanesque influences adorn the walls. What strikes me is the frescoes’ similarity to illuminated manuscript decoration. The monks who painted them worked in the scriptorium in the Benedictine monastery in Civate. The colors are gracefully contained but bold, illustrating religious themes for pilgrims. My favorite fresco is above the exit — the Apocalypse with a host of angels sent to defeat an evil dragon.

Beige, side-banister stuccoes show lions and griffins, symbols of Evil. A beautifully rendered, four-sided stucco ciborium, similar to that in Milan’s Sant’Amborgio church, portrays death, resurrection and the final coming. Atop, four angels hold the winds of the earth.

Below the church is a crypt dedicated to the Virgin Mary. The space, once painted in frescoes, is lined with intimate bas-relief columns.

A side door of the church leads to a courtyard and two-storey building built in 1949. Behind is path 10. A 450-meter climb leads to SEC’s Rifugio Consiglieri, sitting on the saddle between Mounts Rai and Cornizzolo.

Marino and I return to the gate. Just outside the walls, we walk up to signed paths and take n. 7 towards Dosso della Guardia and Suello. We soon pass a large fountain and after 20 minutes meet trail n. 1, which descends from Monte Cornizzolo’s panoramic crest. On path 11 we walk in woods to Falesia dei Laghetti, then pass houses and arrive back at our start, the fountain in Pozzo.

If you want to get to Civate (about 45 kilometers northeast of Milan) by train, see the Trenitalia site.