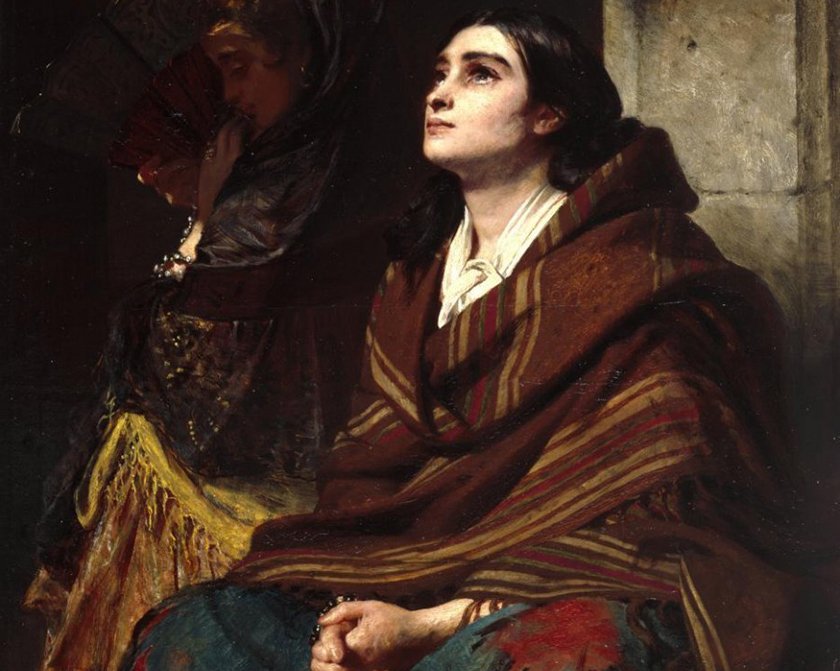 Even if you are not a believer, there's a time to pray.
E

very night before drifting off to sleep I say a little prayer to god (God, if you prefer), in whom I officially do not believe.

Curled up like an embryo, I say: Dear god, please take me out of this misery of mine, I do not want to wake up tomorrow. Bless me with a heart attack, or a jet crashing directly into my bed, or anything you like. Just spare me any further torture.

Unfortunately, like most human beings, I am cursed with the animal inability to take my own life. Instead, I keep hoping some higher power will do it for me. The idea that I might not wake up gives me a deep sense of bliss. And though my prayer remains unanswered, I still say it every night.

If you’re Polish, religion pops out of your fridge.

At the same time, you couldn’t pay me to confess to some strange man in a penguin suit. I simply cannot imagine how one can treat religious scriptures seriously, no matter the religion to which it belongs. I always considered scripture as a bunch of silly rules set down by emperors, rulers, or kings to create peace and order among their own people and start wars against those they chose to look at as savages. Take the Bible, for example, in which one hypocrisy follows another. In the Book of Matthew you’ll find this line: “It is easier for a camel to go through the eye of a needle than for someone who is rich to enter the kingdom of God.”

Elsewhere, in Proverbs, is this pronouncement: “Do you see someone skilled in their work? They will serve before kings; they will not serve before officials of low rank.” Which roughly means that if you can be making $2 million, why work for $10? You figure it out.

On one hand the Bible tells you to smear your house with the blood of lambs, on the other it tells you that the “righteous care for the needs of their animals.”

But I am Polish, and everyone knows you can take a Pole out of Poland, but you can never take Poland from a Pole. Since Poland is 98 percent Roman Catholic, spirituality of some kind will always play a vital role in my life. In my country, religion all but pops out of your fridge. Though no one ever forced me to go to church, god was mentioned at home, mostly by my grandmother. When she couldn’t go to church she’d listen to a mass on the radio and sing Catholic songs. If my mother misbehaved, grandma would tell her, “Be careful, God will punish you.”

So I lived with a strange fear of god, this mythical creature whom I simply couldn’t ignore. During my days as a journalism student I had a professor who sabotaged my every effort to pass the exam.  It didn’t matter how hard I studied. He failed me five times. It felt like he hated me. Tired of this, I finally asked god for help. Not only did I pass, but with an A. It’s hard to ignore a force of this kind.

So yes, I confess, I believe in spirits. I believe in some metaphysical power, in quantum physics, perhaps, in a force that rules our lives and destiny. In theory I believe our fate is already sealed, but that asking for a blessing might not hurt, much in the spirit of Blaise Pascal’s cosmic wager. He said a believer would reap a harvest if it turned out god existed, because he’d always been devout. The non-believer would be left out in the cold.

I came to this conclusion last year, while we still lived in “normal” times. Two dilemmas weighed on me. I badly wanted to make a business deal that just wasn’t working out. At the same time, a good friend, nearing 40, couldn’t get pregnant. It dawned on me that we both needed a miracle. So she prayed for me and I prayed for her. I lit candles for her and she did the same for me. I got the deal. She will deliver her child in November.

The deal admittedly doesn’t mean much anymore, not since the newly-crowned corona began pushing me toward bankruptcy. She, in turn, will be bearing a child in the middle of a pandemic. God’s little jokes. But all that aside, we each wanted something, we prayed, and we got it almost instantly. No wonder I began asking myself, “What on earth have I done to suffer like this?”

Here I am, educated and rational, but I don’t turn to logic; I raise my eyes to the sky.

I was in Rome when the pandemic hit Northern Italy. I had an overconfident chat with my business partner about how the crisis might affect tourism. “It will all be fine,” I told myself, afterwards whispering a prayer in church. I slept calmly that night.

Nearly six months later I was back in Rome. By then both my business and morale had been shuttered. I went to see the little note I’d left for god the last time I was there, the one that asked for a blessing. The note still bore my name and the date. I burst into tears.

I’ve returned to asking myself the same question, namely what I did to deserve all this. I’m an educated woman who comes from a big city. I am well-traveled and well-read. But when I ask the question I don’t turn to science or logic for an answer. Instead, I lift my eyes to the sky. What did I do?

I wish sometimes I were truly religious. I could then look at this suffering as a passageway to heaven. I could imagine myself walking down the red carpet, with St. Peter opening the doors to greet me. Welcome Aleksandra!

But you know the truth, which is that I don’t believe in heaven or in hell.

As Shakespeare wrote: “Hell is empty and all the devils are here.”But I’ll keep on praying, for now at least, with whispering dedicated to quantum physics, and to pharmaceutical companies, of course. Thanks to them I can still get a little sleep.