A world of hurt 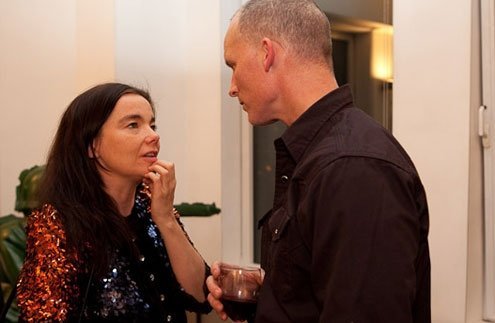 No more happy days: Björk and Matthew Barney in 2010.
E

arly and mid-winter are usually a musical wasteland. Artists take a breather while the public spends money on holiday gifts and then licks it financial wounds. Not so these past two months. In addition to high-profile releases from D’angelo, Sleater-Kinney and Viet Cong, we’ve been treated to a surprise early leak from restless Icelandic visionary Björk.

Originally slated for a late March release, Vulnicura (One Little Indian) unexpectedly appeared in mid-January and has already garnered a considerable amount of positive press. There’s cruel irony involved since in a traditional sense — as traditional as one can ever expect from Björk — this is a break-up album Her relationship with her partner, American artist Matthew Barney, was ending in the run-up up to these recordings, and Vulnicura is the conscious processing of that end.

More than any work she’s produced of late, Vulnicura bears a kinship to 2001’s Vespertine by directly tapping into the pathos of human relationships. Medulla, Volta and Biophilia were impressive works — aurally, visually and technologically — but the conceptual weight of their universe-expanding (or collapsing) imagery often took precedence over the actual listening experience. You were hearing a Björk record, sure, but you were also hearing her reconstruction of the human voice (or execution of album-about-atoms-as-app).

The naked intimacy of Vulnicura stands in contrast to such efforts. It makes no effort to mask its intent. “Stonemilker” opens with somber strings and Björk’s broken vocals — she can barely get the words out. “A juxtaposition in fate / Find our mutual coordinates.” Hearing her pronounce English words is always an unpredictable, uniquely rewarding experience given her accent. But the difficulty with which she stumbles through “juxtaposition” alone stands as arguably the most intense moment on the album. You’re 20 seconds in when she finishes the word.

Lyrically, she remains plainspoken throughout, especially on songs like “History of Touches” and the gut-wrenching “Family.” The 10-minute centerpiece “Black Lake” says it all in the opening verse: “Our love was my womb / But our bond is broken / My shield is gone / My protection is taken.” There’s no question she’s confused and upset, and tackling the subject matter is a literal labor of love.

To compare it to Vespertine, then, is only partly right. Though both investigate the psychic “interior” and both rely on string arrangements and microsounds, Vespertine was an album of the home and the comfort that comes with being there; Vulnicura is an album of watching that home and that comfort fall apart. There are questions about her role as a woman in her family (she and Barney had a child together). There are questions about timeline. There is not much happiness to be found in its words, though there is much to unpack.

“If you are confident enough in what you do… you would nurture it with positive energy,” she told Charlie Rose many years ago. She was speaking of acting, but that outlook spills over into her musical efforts, even in the face of heartache. By enlisting increasingly recognizable Arca to co-produce the whole of Vulnicura, she found a creative spirit (and fan) who could help extract the best from herself.

Arca’s input should not be overstated but listeners familiar with his forward-thinking production for Kanye West, FKA twigs and on his own full-length Xen will recognize the infinitely decaying synths on “History of Touches” or the rolling bass and laser strikes on “Mouth Mantra.” His music melds abstract IDM, hip-hop and ambient influences for a thoroughly modern sound. Long a one-woman present-future, Björk could not have found someone more fitting to compliment her.

Vulnicura doesn’t quite deliver in a “pop song” sense — if you’re a casual listener, you may find it hard to recognize an immediate favorite. What it lacks in uncomplicated melody, however, it returns in raw emotion twofold. Anyone who has known heartbreak will be able to identify with her unadorned delivery. That the fractured beats act as the bedrock of these songs is an added bonus. There is no one quite like Björk. And will be no other album this year quite like Vulnicura.