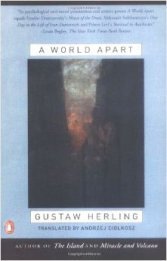 By By Gustaw Herling, translated from the Polish by Andrzej Ciolkosz

Polish writer Gustaw Herling’s memoir of his 18 months in a Siberian labor camp — first published in 1951 — reads at times like a netherworld pastoral. He sets aside anti-Soviet (specifically anti-Stalinist) fury in favor of a psychological portrait of the “walking dead,” prisoners of all stripes tasked with enduring slavery and embracing depravity as their norm.

They are zombie laborers in a literal dystopia where winter temperatures are minus 40C, starvation is common, and self-mutilation among the few means to postpone work. The camp’s inhabitants are redirected from humanity to bestiality in a state-sponsored reinvention of the medieval. For Herling, despair is given purchase by “…the almost suicidal condition of psychological indolence.”

Herling was arrested in 1939 for trying to flee from Poland to Lithuania and eventually transported to the Kargapol camp near Archangel on the cusp of the White Sea. He was 20 at the time. In the camp are stooped “black crocodiles of men” mesmerized by the “intimacy of suffering,” of “life without any expectation of the future,” “inhabitants of a plague infested town.”

He meets Gorcev, a former N.K.V.D. judge, who, once exposed, is beaten to a pulp in plain sight. He befriends Kostelyav, imprisoned for loving Western authors (Soviet charges are their own theater of the absurd), a man whose “personality [is] thoroughly dismantled,” leading him to a primal interpretation of martyrdom: he roasts his arm over an open flame and eventually douses himself in boiling water. He grows fond Dimka, a former priest and barrack orderly who speaks wisely while foraging viciously for scraps of food. He watches as Koval, an urka, or hardened criminal, leads predatory forays into the women’s barracks, gang raping at will. The zombies here are literal: prisoners afflicted by night-blindness “…walking slowly through the [camp] zone … their hands fluttering in front of them,” “dirty scrofulous shadows wrapped in torn rags held together with string.”

Herling gradually grows convinced that man can be human “only under human conditions,” and the place he’s been sent vexes such conditions. “Life in a prison camp is bearable only … when all standards of comparison which apply at liberty have been completely obliterated from the prisoner’s mind and memory.”

Released in 1942 when Poland and Soviet Russia made joined forces after the Nazi invasion, Herling then joined the Russo-Polish army. His spiritual portrayal of camp life remains a testimonial to the mechanisms of slave labor, an established Soviet policy the pro-Moscow West chose either to overlook or deny.

Herling is at his best when the abject flirts with the surreal. The camp holds a “talent” show including a former sailor named Vsevolod. “His chest, shoulders, stomach and thighs were tattooed all over with a little assembly of acrobats, clowns, dancers, hoops and obstacles, lions, elephants and horses with splendid plumes on their heads … and by dexterously flexing the muscles on his stomach or his thighs, on his chest or his biceps, contracting and relaxing them in turn, [Vsevolod] brilliantly brought to life the most realistic circus performance…” And for a moment, the starving and the dying are rapt.

The passage, Fellini in print before Fellini on screen, reveals not only Herling’s smart eye but also his empathy. Even condemned humans cannot and will not stop living. “A World Apart,” while eclipsed in popularity by the prison works of Primo Levi and Aleksandr Solzhenitsyn, is their equal and at times surpasses them in insight. Herling spent his last years in Naples, writing novels and short stories. He died in 2000.