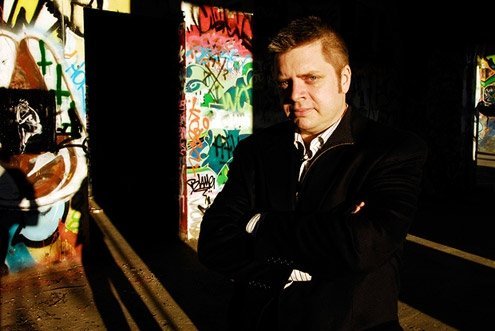 Paul Harding: "I could not be more interested in the fact that I am a self."
&

#8220;Enon” is wordmonger Paul Harding’s impressive second novel. It’s good enough to satisfy the Harding cultists that have sprouted up like mushrooms since the publication of his stunning debut novel, “Tinkers,” which won the 2010 Pulitzer award for fiction.

Some of that satisfaction may derive from the many similarities between the two novels. Taken together, they represent what appears to be the foundation of an ongoing saga.

Like the earlier work, “Enon” (William Heinemann: London, 2013) dramatically opens to a dying. As narrator Charles Washington Crosby tersely refers: “a year ago my only child Kate … was struck and killed by a car. My wife, Susan, and I separated soon afterward.”

Very soon thereafter, to be precise. The separation of the previously happy couple develops in so few pages that, while useful as plot maneuver, it is not entirely credible. All the same, with Kate out of the picture Harding can focus uniquely on solitary Charles. Whose mourning and subsequent collapse into drug-fueled visions will inform this memorial diary of the year following Kate’s death, as well as her father’s quest for a highly American, Emerson-like version of the Transcendentalist “oversoul” — a hypothesized bridge linking the tangible and invisible sides of the human universe.

Probing the leap between life and death is probably a natural choice for Harding. Both “Tinkers” and “Enon” are suggestively set in the raw nature of northern New England. Both showcase the Crosby family male line. Death, or intimations of death prod these men toward extreme “fantastications” that broach “the invisible boundaries between this life, and whatever lies beyond.” Their circumstances give license to their author’s intense speculations on the possibility of purposeful significance on “this awful miracle of a planet.” The questions they raise are vital to Harding, who defines himself as “modern Transcendentalist.”

In “Tinkers,” Charles’ clock-repairer grandfather, George Washington Crosby, hallucinates for eight days preceding his death. It is a mystically ecstatic union with his own father, Howard Crosby, an epileptic and the “tinker” of the title, a seller of household goods from a donkey-drawn cart.

In “Enon,” Charles also falls into visionary states, if inadvertently. Grief-stricken by Kate’s death, he deliberately smashes his hand, shattering bones. Hospital painkillers drive him into a state of hallucinatory consciousness in which he believes he sees Kate again. Craving a final encounter with his daughter, he turns to more potent drugs — and deliberately overdoses into a constant flux of distraught imaginings. Or are they mystic communions?

By night he wanders through his town of Enon, and through the cemetery where Kate is buried alongside generations of Crosbys and centuries of former town residents. In Charles’ nocturnal vagaries, the dead townsfolk rise and take form again, combing their hair and smoothing out their antique clothes. Kate is among them, but her manifestations are episodic and, to Charles, “fractious.” He wants more.

By day he walks the liquescent areas near Lake Enon where Kate swam and picnicked before her fatal bike ride. The lake, together with its marshland and adjacent rivers, inspired settlement founders to name the town in sign of the Hebrew word “enayim,” a place of abundant water.

The fluidity of this natural world makes a perfect and isolated setting for phenomenal reflection. As does its oddly out-of-the-way township —”No transportation ran to or through Enon, nor any major roads (and there were no signs on those roads indicating Enon’s existence.)” It is ideal terrain for Harding’s Charles, since like his great-grandfather Howard, and grandfather George, the working of clocks fascinate him. Their delicate system of balances suggest the complex mechanism that we call our universe, though the universe is not as easily tinkered with. Trying to get into the universal mechanism leads Charles to again overdose on ecstatic visions.

These reach a crescendo as a massive coastal hurricane arrives, another “watery kingdom, ” this time one of “sizzling, unmappable topographies.” During the storm, Charles knocks down a wall, hoping to suck the tempest’s magical force into his hearth and mind. He fails. But is inability to map the “unmappable” brings with it a curative reawakening. Charles returns to daily human chores and his job as gardener.

It’s not that easy to eliminate an intuitive belief in an oversoul or its equivalent. Harding now evokes a detailed incident in which Charles builds a fire, cooks oat cakes, and sits down to one last meal with Kate, this time in a drug-free “twilit realm.”

In this simple, vivid encounter Harding completes a fictionally convincing bridge between two souls: one “dead”; the other “in life.” Has he sold his reader the idea of an “oversoul”? It doesn’t really matter. What he has done is create is a beautiful, non-religious, yet strangely healing tale for our “fractious” world.