A word on baby goats 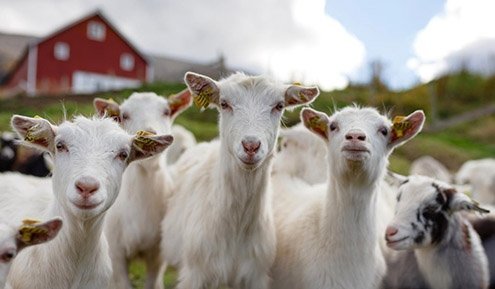 When in doubt….
I

’ll be honest: I’ve had a hard time coming up with a column this summer. Whatever I write down seems silly when compared to current events. Writing, say, about how easy it is to become the “crazy-cat-lady” seems to me a little unfair to the U.S. presidential election campaign, “Black Lives Matter,” and the all too many acts of violence people have been forced to endure.

As a student, I sometimes I think to myself it’s time to start addressing the issues shaping the world in which I’ll soon be living. That’s what a real journalist would do, right?

But as I wallowed in guilt over how superficial my writing might sound, I started to think a bit harder about the state of journalism today (and, by the way, I don’t consider myself journalist). Most every news report I read or watch is negative — not just in content but approach.

From the second an event occurs, every news outlet is determined to find the most sensationalistic way to transmit it, adding its own dose of pessimism about the future. As days pass and the story ages, the noise only gets louder to compensate for dwindling interest. Until the next bit of bad news takes over. I may not be the most knowledgeable reader, but I’m hard-pressed to see this as a balanced way of looking at the world, which is always bigger than any one place or event.

How obvious and superficial, you say to yourself. But I’m not so sure it’s either.

Lately, when it comes to expressing opinion, it seems to me you have two choices: voice an angry viewpoint on a hot topic — perhaps justifiably angry — or keep your mouth shut. There’s nothing in the middle. Even Facebook raging has greater value than articles that focus on constructive topics. My own Facebook page overflows with rant after angry rant — which rack up likes in the hundreds. To which you might say, “At least they’re addressing the issues, right?”

Yes, some comments touch on the substance of any given story and some might be smart. The flip side is that they mostly whip up more and meaner noise, which reinforces the idea that rage is the best story around. This endless flow of anger occasionally leaves me feeling battered and hopeless.

It’s a vicious cycle. Mass media circulates and dwells on negative stories because they have an obligation to report the news, or so they say. Then comes social media, in which everyone who doesn’t have a byline or on-air time gets to voice their fury.

Have there been terrible tragedies this summer? Yes. I just refuse to buy into the single-mindedly furious ways set up to respond to them.

Some of you might call me ridiculous, naïve, even delusional. Ridiculous because positive stories have never anchored news reporting, which is true. People are riveted by disasters. But the problem isn’t the news itself. It’s the fear mongering style used to pass it down, which is now standard. Even politicians mimic the style.

When actors are told to “raise the stakes,” it means adding more emotion to a scene. Now, apply that to the news. What raises the stakes more than convincing everyone that bad guys are all around, whether politicians or terrorists?

So go ahead with the catcalls — “Grow up, Nora, bad things happen in the world…” — I still think the bad-guy focus is both unfair and manipulative. Yes, bad things do happen. But they’re not all that happens.

I’ll keep reading both the good news and the bad. What I won’t do is jump willingly into a rabbit hole packed with people who want to talk only about the awful.

I have no illusions. I grew up in the post- 9/11 world. My life has been inundated by bad news. But it seems to me that some people have dedicated their entire existence to resuscitating and refreshing that original fear.

It’s fine to stay informed. But when nothing good is happening on the planet and your friends start issuing prophesies about the apocalypse, I have a suggestion: look up baby goats.