A will and a way 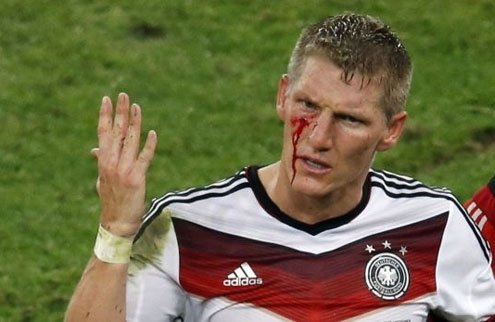 Bastian Schweinsteiger made German resolve clear in the final.
T

here has never been a more fashionable time to be a German. A highly deserved fourth World Cup crown was the just reward for the Deutscher Fussball Bund’s unerring commitment to a fast-paced, efficient and attractive style of play over the last decade.

Joachim Löw’s men were the best team of the tournament in the comprehensive sense of the word, unlike their challengers, so reliant on individual brilliance. Argentina’s much maligned forward line placed an added pressure on the shoulders of Lionel Messi, the Netherlands’ lack of overall quality saw almost all of their attacks come through Arjen Robben, while the absence of both Neymar and Thiago Silva seemed to shed Brazil of all confidence ahead of their semifinal humiliation at the hands of the Germans.

Despite reaching two finals and three semifinals in the past 12 years, few Germans thought that their country would finally strike gold at Brazil 2014.

With Marco Reus, Marcel Schmelzer and Lars Bender sidelined through injury and Manuel Neuer, Philipp Lahm, Bastian Schweinsteiger, Sami Khedira and Miroslav Klose working against the clock to reach full fitness in time for the tournament, all the optimism that followed a serene qualification to the World Cup finals had all but evaporated.

As if the football gods hadn’t already been unkind enough to this German team, there was also a bizarre car accident involving Benedikt Howedes and Julian Draxler. Fortunately the two Schalke 04 players, who were taking part in an event sponsored by Mercedes, were left unscathed and were able to resume training immediately.

This was, nevertheless, the kind of story that had many thinking that Germany was facing a star-crossed year. They found themselves in a tough group containing Portugal, Ghana and the United States, and, while still considered favorites to progress to the knockout stage, they were given little chance of lifting the trophy on South American soil. Before a ball was even kicked it was difficult to look far past the hosts Brazil, their archrivals Argentina, and even former champions Spain.

There was also a sense that Löw’s men might pay the price for not having a conventional number 9 striker to fill the boots of an ageing Miroslav Klose. The alleged shortcoming would end up being the least of the side’s worries, as Thomas Muller’s pace, industry and enterprise made him an effective outlet up front, while Klose himself showed the world why he has to go down as one of the game’s best ever strikers, overtaking Ronaldo as the highest goal-scorer in World Cup history.

Special mentions should go to Toni Kroos, whose typically neat distribution kept Germany’s offensive play ticking, and also to Andre Schurrle, who lived up to his reputation as a hard-working, selfless team player, chipping in with three goals, including the winner against Algeria, and of course that magnificent run and pinpoint cross for Mario Götze to bury past Argentine goalkeeper Sergio Romero in what would be Germany’s world championship moment.

There were times during the tournament when it looked like Germany would pay a price for playing a very high defensive line — most evidently against Ghana and Algeria, who attacked effectively with pace and power. Löw’s decision to keep veteran Lahm in the holding midfield role he had made his own at Bayern Munich, saw Jerome Boateng shifted across to right-back, while Howedes, a right-footed center-back at Schalke, was deployed at left-back in the absence of the injured Schmelzer.

Germany’s problems were not so much the result of playing four center-backs, but rather the combined lack of pace between Per Mertesacker, Boateng and Shkodran Mustafi (drafted in when first-choice center-back Mats Hummels fell ill with a virus). Indeed, the tournament’s early games required Manuel Neuer to operate in the superhuman role of “sweeper keeper,” surging far and wide from his goal line to extinguish opposition counter-attacks.

But from the France game onwards, Germany were able to field both Schweinsteiger and Khedira in defensive midfield, allowing Lahm to move back to his traditional right-back position and (crucially) consigning Mertesacker to the bench in favor of a far nimbler central partnership of Hummels and Boateng.

In these last three games, die Mannschaft’s superiority became clear, their disciplined nullification of France’s forward forays just as admirable as their shuddering 7-1 humiliation of the hosts. When Khedira, an athletic, assured midfielder, was cruelly injured in the warm-up session on the night of the final, and his replacement Christoph Kramer hobbled off in the first half, the German juggernaut again seemed under threat.

But as in earlier games, Neuer was called to the rescue, famously clattering into Gonzalo Higuain to claim a crucial loose ball. The streams of blood pouring from the battle-worn face of Bastian Schweinsteiger spoke more than a thousand words as to how determined Germany were not to let a famous victory slip from their grasp. This was, quite simply, the defining moment for a team, whose hard work over the last decade had finally paid off on the largest stage football has to offer.