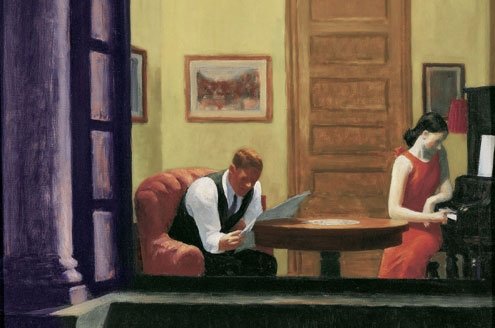 It's horrible, I blurted out, "just like every good marriage!"
I

was sitting beside a stranger on an airplane. That’s where I often find myself saying things I didn’t intend.

He was grey-haired, maybe 60, but wore the smile of someone much younger. He had the window seat and I had the aisle.

“Where are you headed?” he asked me.

“I’m going to Dayton to see my mother. She’s having surgery tomorrow. It’s pretty major and I really wanted to be there for it.”

We sat in silence for a moment as the jet’s engines revved to full throttle and we took off LaGuardia Airport, soaring above the city of New York before turning west.

“Where in New York do you live?” I asked him

“I don’t. I was making a connection in New York. I live in Maine. I’m heading to Cincinnati for a speaking engagement.”

“Ah, What are you speaking on?”

He reached into his bag and pulled out a book titled, “Americans who Tell the Truth.” The cover was illustrated with tiny squares with the faces of historic figures. Each frame focused on eyes, giving the book a penetrating appeal.

I opened the cover. The first page featured the poet Walt Whitman. His face was calm and enigmatic, yet colorfully alive. His portrait included a quote from his work, as did all the others.

“Did you paint these?”

“Yes. I’m an artist really,” the man replied. “I began this series of portraits as a way to respond to some personal grief. I was feeling helpless and I wanted to do something positive. I began with one portrait but I kept going and eventually the paintings became this book.”

“Thanks. I don’t spend much time painting these days. Mostly I travel to universities speaking and appearing on panels. My main message is that a single individual speaking up to tell the truth can shape history.”

The flight attendant offered us a drink. He ordered tomato juice and I asked for a Coke. We both took a few sips and reclined. I felt strangely comfortable with him.

“I hope you don’t mind me asking,” he began, “but this situation with your mom sounds pretty difficult. How old is she?”

“She’s 86. She was healthy most of her life but I think that’s more because she never went to the doctor. My dad says when you go to see doctors they just find stuff that’s wrong with you. ‘Don’t fix what’s not broken,’ he says. It’s a good way to pretend everything is fine.”

The flight attendant returned. He asked for seconds on his juice.

“You mentioned your dad. Are your parents still together?”

“They must be happy.”

“No, it’s horrible,” I blurted out, “just like every good marriage!”

As soon as I said it, we both began laughing uncontrollably.

“Did I just say that?” I asked surprised.

“Yes, you did and it’s hilarious. I better write that down it’s so good.

Their life together was horrible, like all good marriages.

While he jotted in his journal my mind filled with memories of my parents bickering and their well-worn lines of quarrel repeated over the years. The pattern was that of family verse, a story that defined them. But I’d never really thought their marriage was horrible. It had just slipped out of my mouth. Maybe it was truer than I wanted to admit. Or maybe it was just a slip.

“Telling the truth changes history, you know. Personal history included,” he said. “Who knows what will happen after this visit. Maybe you’ll see things differently.”

“Is that in your book too?” I asked. “The part about your personal history?”

“No, but it should be. Maybe I’ll add that in the next edition.”

He smiled and returned his book to his bag as the “Fasten seat belt” sign went bright.

We both sat up in our chairs and clasped our belts shut. We then returned to being strangers, and prepared for landing.