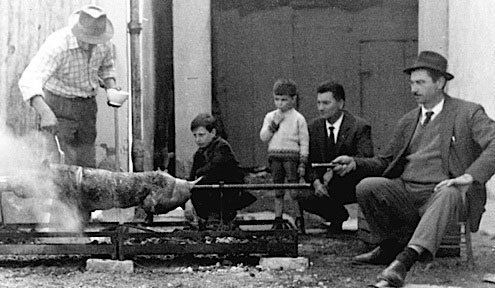 ail from Long Island, who follows The American online (and God bless her for it!), wrote last month asking for advice on her upcoming trip to Italy. “…We’re flying over for a wedding in Udine, where we have relatives,” she writes. “We’ll be there around Christmas. What kinds of things can we expect to eat?” Gail went on to describe some of her husband’s dietary restrictions, limits that are adding caution to curiosity for the impending trip.

My first reaction was abrupt and monosyllabic: Whoa!

A wedding, plus reunion with never-before-seen Italian relatives, plus Christmas? That’s the trifecta of Italian culinary celebrations. Forget restrictions, you’re going to need an on-call doctor. And lots of Alka-Seltzer.

I can’t hope to encompass a wedding and a reunion, but here’s a look at some of the things that most Italians serve around Christmas time, as well as a few whys…

Like almost all Italian family meals, holiday dinners put the focus on locus. Where you are will tell you one thing about what you’ll eat, but usually not as much as where your hosts are from. Region, province and even town-specific dishes always make appearances on special occasions. Gail didn’t mention whether her relatives are native Udinese or non, but the son of a doctor from Abruzzo and a librarian from Lodi who’s been raised in Udine is most likely to have specialties from all three cuisines on his table, no matter the distance from origin.

That said, there are a number of classics. First, for Christmas Eve, think fish. (That should fit well with Gail’s gut-guarding guidelines.) Most meals start with a fish-based risotto of one form or another (usually mixed seafood or cuttlefish, nero di sepia), although occasionally this will be substituted with a pasta dish, like spaghetti e vongole (small Mediterranean clams). For the main course capitone (fried eel) is a popular favorite. For the queasier among you: eel is actually a light meat, not dissimilar to chicken, and quite tasty as long as you can keep your imagination from slithering away from you.

Another common dish is fried baccalà, cod that has been dried and salted, and is soaked prior to being fried fresh for the table. In the south, some call for seven different fish dishes to be served (for the seven sacraments), while others simply believe there have to be an odd number of dishes on the table.

Meat makes its return for Christmas day. In central and southern Italy, abbacchio (roast lamb) is popular. But you can also find a range of other meats being served, from porchetta (roast pig) and baked hams right on down to humble rump roast.

In the North, two main dishes are Christmas staples: cotecchino and zampone. These two differ substantially in form, but not in substance. The cotecchino is a length of intestine filled with spiced mincemeats. The zampone is the skin of a pig’s foot filled with… spiced mincemeats. If my minimalist descriptions leave these two dishes sounding only slightly more appetizing than shoe leather, don’t give up on them just yet. Invariably served on a bed of lentils, the mincemeats are delicious: aromatic and faintly fatty, like breakfast sausage gone big league. One word to the wise: don’t eat the skin covers. Both cotecchino and zampone are served in slices, and you should be careful to peel off the casing before you dig in.

With or without mincemeats, lentils make another, all-important appearance on New Year’s Eve. Like the fried fish (said to bring good luck) and the odd number of dishes on the table (said to ward off bad luck), the lentils are a tabletop talisman. Italian popular wisdom holds that anyone who eats lentils with the arrival of the New Year is destined to become wealthy over the next twelve months. This means that Italians from the Alps to Etna serve the lucky legumes in heaps, and you’re sure to encounter many a mouthful.

Desserts are surprisingly simple, usually a combination of panettone (a simple cake bread that is usually enriched with nuts and candied fruit, torrone (almond-studded nougat, sometimes encased in chocolate), fresh fruit and nuts, both of which are believed to encourage fertility.

Family, food, fun and making merry with the metaphysical…what more could an epicurean ask for? Enjoy, and Happy Holidays.