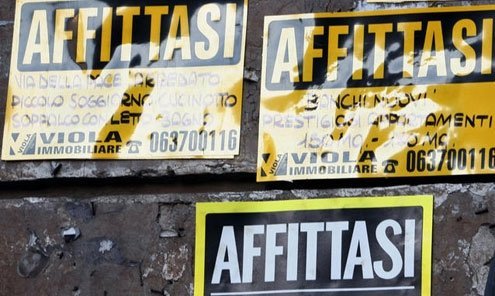 Crazy landlord stories are sadly commonplace in Rome.
I

t was my last day in Rome. Hurrying back from my hundredth errand of the day, juggling panettone for my neighbors in one hand and dry-cleaning in the other, I fumbled for my apartment keys and stuck them into the lock. Nothing happened.

Putting down my bags, I tried again. The key turned, but the door wouldn’t open. That’s when I heard a voice from the other side of my door.

“Amanda.” I froze. It was my landlady. We’d agreed that my official move-out date was the following day. I’d leave the keys in the mailbox and head for the airport. The last we’d spoken, two days before, I’d agreed to let a plumber into the apartment on my last night. “Tanti e tanti grazie! Buon viaggio!” she’d replied via text.

So what was she now doing in my apartment? Without my permission?

“Valentina? Ma che fai?” I asked, stunned. “Have you locked me out?”

“Amanda. I came to make sure everything was in order. And it’s not,” she yelled through the door. “You’re a thief!”

“What? What are you talking about?”

“My floor mat.” I could hear her stomping around my apartment. “And my poster! The one with the flowers! Where are my things, Amanda? I’m not letting you in until you tell me where they are!”

I knew I hadn’t thrown out her mat or her picture. I also knew that if reason hadn’t stopped her from illegally entering my apartment and locking me out, it wouldn’t kick in now, either. “Valentina, I didn’t throw anything away. But you need to let me in!” My valuables were strewn across the apartment as I packed. I wondered if she’d damaged or stolen anything. Panicking, I rang my neighbor’s doorbell. No answer.

Eventually, my door opened. “Show me where my things are!” Valentina yelled.

Stomping to the bedroom, I dragged the bed to the side and pointed to the floor mat underneath it.

“And my picture? My picture, Amanda? The one with the flowers? That picture was very important to me! You’ve stolen it!”

As she continued yelling about the importance of a Monet reproduction, it hit me that I might be at risk. “Valentina, I have the picture. I promise. But you have to step outside of the apartment.”

“I’m not going anywhere!” she shouted.

“Valentina, please. You can’t be here like this.” I opened the door and gestured to it.

She grabbed my arm and twisted it behind me, hard. I screamed.

My next-door neighbor finally appeared in the hall. She’d apparently been napping with her month-old son. “What is going on?”

Valentina started. “I am the owner here. Amanda is the renter, and she’s moving out tomorrow, so I came to make sure everything was here and it’s not. She is a thief!”

Laura rubbed her eyes. “So Amanda is moving out tomorrow? Then tomorrow, when she’s left, you see if anything is missing, and if so, you file a denuncia. You don’t break into the apartment now to check. This isn’t how it’s done.”

“Yes, but I am the owner. This is my apartment. And she’s stolen my things!”

“But the lease is up tomorrow?”

“So it’s still Amanda’s apartment now,” Laura pressed. “You can come in after.”

Another door opened at the other end of the hall. “Tutto bene qui?”

Now faced with two Italians, Valentina began looking a bit embarrassed at having been caught bullying a young straniera. Had I been Italian, I knew, the situation would have been different. She wouldn’t have dared.

“The thing is,” she said to them, as if I weren’t standing there, “Amanda has always been a brava ragazza. She’s always been very precise, she’s always paid her rent on time. But now I realize she’s a thief. And…”

As Valentina turned to go, she stopped. “Well, Amanda, do me one favor. Please leave the keys in the mailbox as I asked, okay?”

My jaw dropped. She’d broken into my apartment, locked me out, assaulted me, and now she wanted… a favor?

After she left, tears replaced panic. Everyone I knew in Italy had a story about a crazy landlord — except me. Mine had unfolded on my last day.

“Oh, Amanda, I’m so sorry,” Laura said. “Come in for a second. Relax. Are you okay? Do you want me to call the police? Do you want to stay here tonight? Can I get you anything?”

Sitting on her couch, my heart slowed from its frightened-rabbit thud. I considered how much I hated the side of Italian culture I’d just seen. It wasn’t the first time I’d encountered people using force and threats to try to get what they wanted, or bursting into a violent rage and then, just as quickly, calming down and changing course. Anger and violence exist in every culture. But some patterns were particular to Italy.

Of course, for every Valentina there was a Laura. And for every person who would try to exploit or intimidate a young foreigner, someone else would try to protect her. The balance had kept me in me in Rome’s corner.

I stayed at a friend’s house that night. Before leaving for the last time, I went back and dragged out the Monet print from behind the bed, where I’d stored it when I first moved in, four years ago. I locked the door and dropped the keys in the mailbox.

Over the next week, five bruises bloomed on my forearm, one for each of Valentina’s fingerprints — a painful salve against nostalgia for a country I knew, and loved, too well.