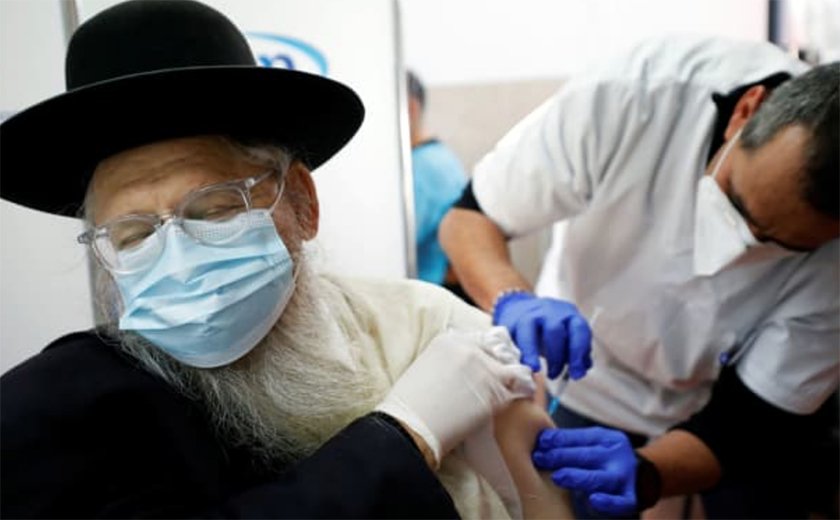 Israel: Exemplary vaccine work, but for Jews only.
W

ith the second month of the new year just around the corner, I thought it might be useful to take a quick look at how vaccination campaigns are going in a handful of countries badly hit by COVID-19. It’s not a very pretty snapshot.

United States: So far, distribution has been so chaotic that millions of doses may hit their expiration date before they can be administered. That’s not the way you want a vaccination campaign to start, particularly given the U.S. infection rate.

Italy: The campaign has done well enough in its first two months. Well over half the doses the country received have already been administered, which means 1.1 percent of the population has received a first dose. That’s the best rate in Europe. But Italy will have to speed things up if it expects to keep up with its stated goal of 470,000 weekly Pfizer doses.

That rate would allow the country to get a dose into all 2 million of its health care workers and also cover nursing home residents and staff by mid-February. It would also cover all 4.4 million citizens by the end of April. It could then turn its attention to the 60 to 79 population.

The best news, however, was the EU’s announcement that it had managed to all but double its order to Pfizer, with Italy’s share rising to 40 million doses.

This might actually make it possible for the country to cover everybody by September without needing to fall back on the less effective AstraZeneca product.

In addition, Italy is also due some Moderna and Johnson & Johnson doses in the spring. Put this together with the Pfizer news, and there’s every reason to be hopeful about the months ahead.

The best news was the EU’s announcement that it had managed to all but double its order to Pfizer.

India: Hands down, this is the most ambitious campaign in the world. Though India hasn’t yet started vaccinating, government and medical officials believe they can cover a quarter of the country’s 1.3 billion people by August, though to do so the country will probably need to double its existing number of health care workers.

India has the lowest rate of “vaccine hesitancy” in the world, at 13 percent. This rate is considerably higher in Europe and the U.S., whose population has a long tradition of wariness toward “intrusions,” even when they’re potentially lifesaving.

Russia: Despite the approval of its Sputnik V vaccine in August, very few Russians are willing to roll up their sleeves. So far, only a million doses have been administered, fewer per capita than Italy.

Russian leeriness to some extent resembles vaccine hesitancy in the U.S. The Cold War legacy of the Russian state doesn’t make its medical establishment particularly popular, and many seem determined to take their chances.

Israel: Israel wins the efficiency derby by a mile, though it bears remembering it has a total national population, 9.3 million, of a large city. That said it has nonetheless served as a model for the world.

Here’s how it works: Eligible citizens are assigned appointments at vaccine centers, get their shots on time, are monitored for allergic reactions, and leave. Over an early 10-day span, Israel vaccinated 10 percent of its population, a figure that’s now at 18 percent and will rise again before the end of January. The rate included more than 70 percent of country’s over-60 population.
Compare that to the U.S., which over a similar 10-day period was able to inoculate only 0.5 percent of its citizens. Germany and Italy did even worse, with 0.4 percent each. Two important caveats on the Israeli “miracle”: