A Touch of Evil 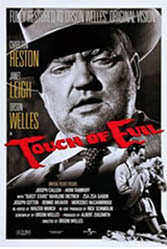 What to say about a border-town noir in which corrupt cop in the rotund form of Orson Welles dead pans a brothel-owner played by agelessly cold-eyed Marlene Dietrich “I wish it were your chili I was getting fat on.” The exchange comes early into a sweaty, jagged and claustrophobic story about a car bomb explosion local police captain Hank Quinlan (Welles) is determined to pin on a Mexican drug lord. Standing in his way is dapper Ramon Vargas (Charlton Heston), a Mexican anti-drug official in town with his American wife Suzie (Janet Leigh). The nasty, gimpy-legged Quinlan has the locals in his pocket, while Vargas is dogged — so it is the war wills, defensive deputies and crooked state officials included, is joined. “Border towns,” mutters Quinlan, “bring out the worst in a country,” and he seems determined to prove his own point by framing Vargas’ wife.

Throughout, the mood is one of contagious squalor. Welles’ control over his material is masterful. He pumps it with menacing close-ups and tosses in Dennis Weaver as a madcap motel night manager. He hardens the obese Quinlan into a scheming cynic who hisses at “wild-eyed idealists; they’re the ones who’re making trouble in the world,” a 1950s world of beatniks run amok.

But Quinlan’s scheme is slowly closing in on him, and Welles brings his drunken resignation to bear in a timelessly modern way, through a big cop in a small town who comes to understand he’s really just a nobody in a swamp.

At the end, Welles again pulls the choke in Dietrich’s — Tanya’s — presence. Drunk, Quinlan thinks she’s reading cards and wants his fortune told. “You haven’t got any,” she tells the disgraced captain. “Your future’s all used up.” Haunted by too many demons to count, Welles’ never made another film of this caliber.