A Tomb For Boris Davidovich 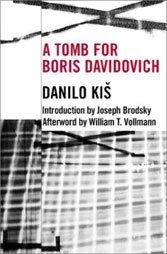 By Danilo Kiš, translated from the Serbo-Croatian by Duska Miic-Mitchell

There is no lack of superb fiction about the underbelly of the Communist world, particularly during the savage Stalinist purges of the 1930s. Show trials, gulag life, and the depredations of torture are a genre in their own right. So is the anti-Semitic undercurrent that helped anchor Soviet persecution.

Little, however, compares to Serb Danilo Kiš’s surgical insights into that period’s “magnetic poles of revolution-counterrevolution,” as if the Serbian author understood the rites of persecution at a molecular level, creating characters so “at home” with the forced confessions that their invented lies make fiction the only fact. His harangued people, anarchists, doctors, poets, and explosives experts, are poetically-conceived emissaries from the “cosmopolitan region of the soul, which has no precise map.” They are good men and bad whose life lyrics, some of them once promising, are overturned and at times sharpened — an invigorating paradox — by Comintern-era misfortunes.

These nine stories, first published in Belgrade in 1976, are linked in that a central character in one may appear as ancillary in another, making the whole into a deeply unsettling tapestry. The title story, the longest and the most riveting, compresses the life of one Boris Davidovich Malamud, or B.D. Novsky, “a character without a face or voice,” a Jew who gets his start as an anti-Tsarist terrorist, is applauded by Bolshevik higher-ups, becoming a political commissar, only to fall afoul of intrigue and face espionage charges. “In the embrace of nothingness,” Novsky is beaten into a false confession by those who “search for fiction and premises,” the Communist world’s vicious bedfellows. Worse still, Novsky is spared death, which, in Kiš’s maze of dead-end lives (“winning is rare and losing is the rule”) is the one decision human cannot afford, let alone live with.

Kiš was among the finest and least known of a handful of exquisite late-Communist era authors, those able to combine cruel reality with enriched folklore. He died of lung cancer in 1989 at age 44, only weeks before the fall of the Berlin Wall.