A tiny dose of reality 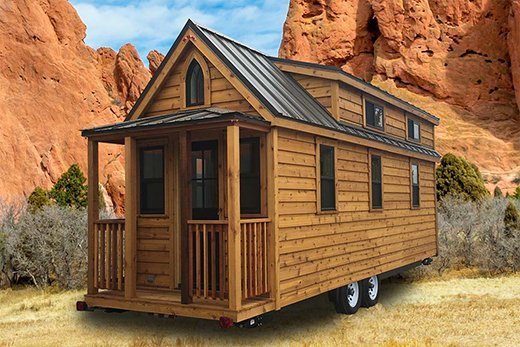 Tiny houses can look very inviting on TV, but the real thing has a different feel.
I

t had been raining all day. I was cramped in an RV trailer with an old friend. On paper, the trip to the Pacific Northwest had seemed like a recipe for fun. But reality doesn’t always go along. I was going stir crazy and I wanted to get out, if not go home to Brooklyn.

It had all started innocently enough. I was a binge watcher of TV shows about tiny houses.

My favorite was a series in which the host traveled the world exploring tiny homes in exotic locations. I looked on wide-eyed at the mountain vistas and ocean cliffs. Wanderlust blended with low overhead captivated my thrifty side.

All the shows came with the same general premise. Five hundred square feet (about 50 square maters), used well, could allow you to live with the same comforts of a traditional home, just trimmed down in size. And because these houses moved easily, they could be parked in any idyllic spot you had in mind, whether a forest or an open field.

In tiny homes, beds could be folded up into couches, dining tables released from wall hinges and clothing stored in cubbies tucked close to the floor. You could have everything you needed, but without excess. The unofficial motto was “less is more.”

I was a binge watcher of TV shows about tiny houses. My favorite was a series in which the host traveled the world exploring tiny homes in exotic locations. I looked wide-eyed at the mountain vistas and ocean cliffs.

Tiny homes are not a novelty. Earlier versions were called RV’s, motor homes or travel trailers. All they lacked was the peaked roof and cedar siding that dress up the current models. These are intended to give a traditional house a doll house feel, presumably evoking a simpler time of life. That may be part of the allure.

Recently, television met reality when I received an invitation for a trip to visit a friend, who explained the accommodations would be a trailer parked on a forested lot of Douglas Fir trees. It sounded lovely. For a short time, I could shed my full-sized home for an experiment in tiny home living. I eagerly accepted the invitation and left Brooklyn on a plane westward toward Washington state.

When I got there, I found a Cougar Keystone parked off a gravel road. A small boardwalk created a path to the front steps, and I rolled my luggage to the front door.

As soon as I walked in, I felt like a giant in a tiny world. Walls were a series of faux wood cabinets and the floor was thin linoleum. In the center were a dining table, a two-burner stove, microwave and sink. Cabinets held dishes and food stocks, next to closets with pants, jackets, sheets and towels. A sliding door hid a bed on one end and the bathroom with a miniature sink and slight shower on the other.

Sitting at the dining table, I admired how it all fit so neatly by design. Although the floor bounced when I walked and the walls were nearly as thin as cardboard, it held everything one needed, or so it seemed. I caught up with my friend over a cup of tea and we planned our adventures for the next few days.

But before long I felt the need to get up and move. Except there was nowhere to go aside from the few steps from the stove to the bed to the bathroom. I tried to stretch, but my arms hit the walls. Standing, I couldn’t reach above my head. My body felt compressed and my expansive mood waned. I felt trapped.

Without openly sharing my discomfort, I simply suggested we go outside for a walk. Fresh air would do me good and my friend agreed.

We put on our jackets, but by the time we opened the door it was raining. We were intrepid at first, until rain turned into a downpour that forced us back in. I hung my wet jacket over the bathroom door and sat back at the table.

The rain sounded like a tambourine on the vinyl roof. Frowning, my friend checked the weather forecast; rain was expected for the next three days. It was the Olympic Peninsula after all. What did I expect from a stretch of land known for its rain forests?

Disheartened, I looked out the foggy windows. I felt like a caged animal. The once towering Douglas Firs now seemed oppressive and I longed to be back in the city. I sighed with resignation.

In the Tiny House TV shows I loved, the weather outside is always glorious, and the sun always shines. Doors and windows are open for enjoying the great outdoors. Inhabitants smile and glow.

Real life is unsweetened. For all that was packed into the tiny living space, there was simply no space to live. And that, to me, makes the expression “home, sweet, home” all the more appealing.