A tell-tale sojourn in “The Big Smoke” 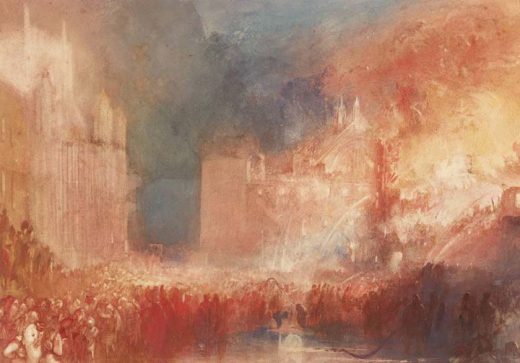 J.M.W Turner's "The Burning of the Houses of Parliament," painted in the mid-1830s. Turner's watercolor works had a powerful impact on Melville.
T

his summer — August 1 to be precise —marked the 200th birthday of one of the most influential literary figures of modern times: Herman Melville. The year 2019 also marks the 170th anniversary of Melville’s two-month stay in London, and plausibly the moment in which he started thinking of the narrative that would later become the masterpiece of American literature, “Moby-Dick”.

Melville had just turned 30, when he travelled to London in November to market “White J

Herman Melville, then 51, as portrayed by Joseph Oriel Eaton in 1870. He was 30 when he visited London.

acket,” his fifth and most recent book. He had previously published four volumes: two autobiographical fictions “Typee” and “Omoo” (1846 and 1847, respectively), both combining recollections of his experience as a sailor in the Pacific (the South Seas) with fictional elements. After these came “Mardi” (1849), Melville’s first attempt at writing a philosophical epic, and finally “Redburn” (1849), again a semi-autobiographical tale of sailing life and the often brutal treatment to which sailors were exposed.

“Mardi” had been printed in London by the British publisher Richard Bentley, who was unable to generate much profit from the novel. A prelude to “Moby-Dick”, the metaphysical philosophy contained in “Mardi” was not particularly easy to market, and the book sold poorly. Melville then delivered “White-Jacket,” another semi-autobiographical sailor memoir, along the lines of “Redburn.”

Melville met with Bentley in London in November 1849, determined to seal a good deal for his new book. Although “Mardi” had not proven itself a wise investment, the publisher agreed to print “White-Jacket,” paying Melville £200 for the copyright to a first edition. This was not the deal Melville had been hoping for, as the publisher offered no advance. But since publication was still a possibility, Melville ended up accepting. Yet he needed money. And above all, his mind was already beyond “White-Jacket.”

Melville’s accounts of his journey exude fascination for that cornucopia of emotions 19th-century London must have put on display. Most especially books, antique books above all. A book lover, his interest extended beyond finding old books at bargain rates. Mesmerized by their beauty, he also adored coming across antique books nicely printed and bound.

He soon found himself “vagabonding thro’ the courts and lanes.” as he put it in his journal. This vagabonding took him from Holborn to Greenwich, from the London of Shakespeare, the British Museum and the National Gallery, to “squalid lanes and alleys,” red-light districts, and even to a public execution (which Charles Dickens also happened to attend, though the two writers didn’t meet).

Melville’s 1849 “vagabonding” took him from the London of Shakespeare to “squalid lanes and alleys,” red-light districts.

While on one of the Bridges, the thought struck me again that a fine thing might be written about a Blue Monday in November London – a city of Dis (Dante’s) – clouds of smoke – the damned etc. – coal barges – coaly waters, cast iron Duke etc.—its marks are left on you.

The allusion to Italian medieval poet Dante Alighieri’s “Divine Comedy” and its city of Dis, the imaginary place that encompasses the sixth to the ninth circles of Hell, itself presages the otherworldly atmosphere and uncanny magic contained in “Moby-Dick.” It is not difficult to imagine the young Melville, wandering and pondering in the blackened streets of the “Big Smoke” — London’s 19th-century nickname —daydreaming about his sixth book.

But London’s greatest contribution to “Moby-Dick” comes from the works of the British painter J.M.W. Turner, which Melville apparently saw at the National Gallery. Turner specialized in marine subjects and his whaling scenes, described by one critic as “tumultuous surges of brushwork,” were a primary source of inspiration for Melville (who explicitly mentions Turner in one of his notes). Turner’s tumultuous surges of brushwork inspired the whale painting scene in chapter three of Moby-Dick. In it, Ishmael, the first person narrator, while trying to decipher the subject of an old painting, embarks on one of his fascinating epistemological quests:

Such unaccountable masses of shades and shadows, that at first you almost thought some ambitious young artist, in the time of the New England hags, had endeavored to delineate chaos bewitched.  (…) But what most puzzled and confounded you was a long, limber, portentous, black mass of something hovering in the centre of the picture over three blue, dim, perpendicular lines floating in a nameless yeast. A boggy, soggy, squitchy picture truly, enough to drive a nervous man distracted. Yet was there a sort of indefinite, half-attained, unimaginable sublimity about it that fairly froze you to it, till you involuntarily took an oath with yourself to find out what that marvellous painting meant. (…) It’s the Black Sea in a midnight gale.- It’s the unnatural combat of the four primal elements.- It’s a blasted heath.- It’s a Hyperborean winter scene.- It’s the breaking-up of the icebound stream of Time. But last all these fancies yielded to that one portentous something in the picture’s midst. That once found out, and all the rest were plain. But stop; does it not bear a faint resemblance to a gigantic fish? Even the great Leviathan himself?

Melville’s short stay in the “Big Smoke” may have been a blessing for world literature. A blue plaque at 25 Craven Street, his London accommodation, reminds the city of the place where the American literary masterpiece got its imaginative start. As if I needed one more reason to love London.