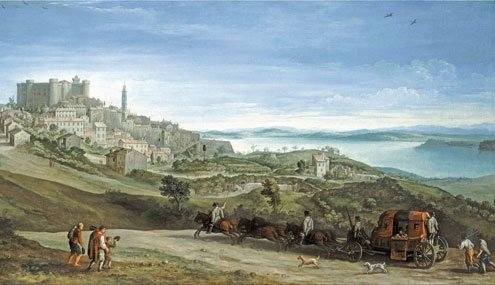 Over time, the strange become familiar, and even pleasant.
T

he train to Lake Bracciano from Rome breaks through the hills for a fleeting moment. I like to wait for it. Out my window and far below the lake lies flat as a plate and the stone buildings of Bracciano’s old town cluster like rigid sentinels observing from above. When I lived in Bracciano seven years ago this sight thrilled me. The bell tower with its odd curving hat ending in a point marked my apartment. There was the thrill for its charm and for the novelty that I could live in such a place.

When I now travel to Bracciano from Rome for an afternoon’s swim, I get off the train and walk a straight path down the steep hill to the beach. I go to the same beach I’ve always gone to and swim in the cool fresh water. The lake’s depth increases toward its center like an inverted cone, a volcano flipped inside out. It’s a crater lake, formed from an ancient eruption, and among the deepest in Italy. I’ve always imagined its shape gives the water its purple color, but I don’t why or how. Most everything about the place is familiar: the lake’s color, the revealing bathing suits of the women, the view from the water of the castle half covered in ivy lumbering on the top of the hill.

When did it happen? Was there a time when the foreign changed to familiarity?

When I came to Italy I was the outsider who struggled to grasp what were the things I would never understand and what were the things I could try to understand. Certainly I would never be able to manage being stared at by the row of old men whose late afternoon occupation was merely that: leaning against a stone wall and watching people pass, keeping an extra keen eye out for the girls, never mind if they were young enough to be their grandchildren. Certainly I would never figure out the afternoon lull, what the Italians were doing in their houses for the three hours between 1:30 and 4:30 p.m. Walk the streets at 3 p.m. and Bracciano was a ghost town, not a person, not a car. Walk the same streets again at 5 p.m. and they were crowded, busy with people chatting, shopping, leaning against the wall, and always watching.

Certainly I would never absorb the language or add the flourishes just where the Italians added them. I would never be able to pick up the phone and convey what I needed to the person on the other end. I would never get beyond the gawking silence and head shaking that came after I had stuttered out what I could in Italian. My interlocutor looked at me with a shocked, distorted face that seemed to ask how I could dare to butcher their language’s elegance if not question my right to be there, in their country, not mine.

Over the seven years that I have lived here I have begun to understand that one concession I have made as a foreigner is accepting that I will always be one. My Italian will always be what it is, a slow trudge to competency. People still grimace when I struggle to say something I don’t have words for. My view of the elderly, girl-oriented Italian men has only shifted from a steely-eyed dismay to a jeering amusement, but it will never blossom to understanding.

Yet when I go to Bracciano from Rome for an afternoon and stand atop the hill after walking up, letting my sweat dry, catching my breath, my vision sweeps over the panorama below. I see the triangle tip of the largest mountain pointing up behind the sleepy lake town of Trevignano and the white spots that are sail boats traveling on the lake in groups. I smell the pepper of the fig trees and see the trash strewn in the grass. This scene is mine too. The space between its novelty and its familiarity has been the life I have lived in Italy.

In town I get a gelato at the Gran Caffè Italia and recognize the older, made-up woman at the cash machine and the woman who scoops out my pistachio and fior di latte into a cup. I don’t know any of these people. I’ve just observed them over time. But I realize that in my relation to them I no longer feel separate. And even if they don’t recognize me, our transactions are smooth and unquestioning. Without noticing, I have become a part of it, a part of Italy.