A stone house in a deep dark forest 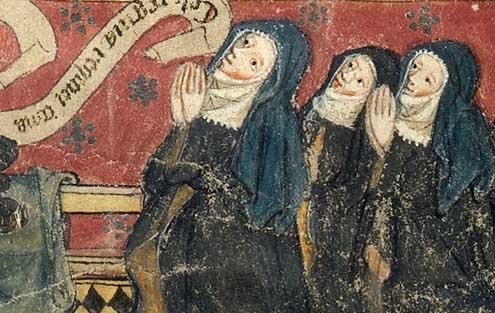 Taking the vows was a way out of temporal servitude to men.

Once upon a time, a group of women made their home in a stone house at the foot of a narrow valley. The women lived there for some 200 years, offering hospitality to the sick and to wayfarers and passing pilgrims.

How on earth did they decide to take the risk of living in the woods near Assisi in the late 13th century, a time when law and order was a loose concept at best? They were nuns of course; Benedictine nuns, and they must have been strong ladies.

Throughout the Middle Ages, choosing convent life was the only reputable alternative to lifetime obedience to the men of the family and an arranged marriage.

But the choice also removed the women from day-to-day society. The nuns lived out their lives within the confines of the monastery, mostly growing their own food, alternating work, study and prayer.

Did the women choose this cloistering alternative of their own free will? Folklore suggests they often didn’t, since what a woman could and could not do was limited, as was the idea of a “free” woman. The reality is that convent life also represented a way of escaping abuse and poverty and having access to the rare privilege of studying, since for millennia education was mostly a male preserve.

We think of nuns less of this days. They seem on the far margins of emancipated society, at least in the West. Yet in Buddhist Asia, nuns still thrive, and choosing to live as one remains a perfectly acceptable way of life.

Did the nuns in Umbria fear their lives in the wilderness? It’s a question I often ask myself when I drive past the beautiful, shaded valley where they once lived. As lovely as it is, I’d never want to be there in a blizzard or on a winter night. It’s lonely, cold and dark territory.

Toward the end of the14th century, the nuns felt compelled to move, seeking shelter within Assisi’s town tall walls. The wolf-prowled woods were increasingly roamed over by brigands. Enough was enough.

They must have been sad to leave their home, the garden, and the ancient trees. Afterward, the little citadel that was their monastery, guesthouse, church, and granary mill fell slowly into disrepair. The mill continued to operate through the late 19th-century but was finally abandoned and all was buried under weeds.

In 2011, thanks to FAI, Italy’s National Trust, the grounds were taken over by a small army of gardeners and builders who worked to restore the landscape to its one-time beauty. Both the valley and its buildings now form part of the Bosco di San Francesco National Park.

If you’re in Umbria, put it on your itinerary. It’s a place of serene beauty, with a fine thinking trail through the woods, a land art installation, and a garden filled with vintage fruit trees and flowers. Maybe you’ll be fortunate enough to chat with park director Laura Cucchia, whose long-standing affinity for these lonely mountains includes expertise in the breeds of local wolves. She’s also an ornithologist who can recognize 150 distinct birdcalls.

I’d like to think the medieval nuns would be happy to know about the fate of their ancient home, which now attracts thousands of visitors. I’d also like to think they’d be pleased that a strong, well-educated woman leads the project. They’d probably love to love to know she’s not afraid of wolves.

Fish was central to the monastic diet as part of strict abstinence from meat (a ban that could also apply to eggs and dairy). This is a classic Umbrian recipe used in for both freshwater and sea water white fish.

— Season both sides of the fish fillets with a sprinkle of salt. Place the lemon slices in a baking dish that large enough to hold the fish. Drizzle with 2 teaspoon olive oil. Place the fillets, skin-side down, in one layer over the lemon slices.

— Spoon the breadcrumb mixture over of the fish fillets in a light, even layer.

— Transfer the baking dish to the oven and cook until the fish fillets are cooked and the breadcrumbs are golden. The baking time will depend on the thickness of the fillets, usually 10 to 20 minutes.

Use this time to give thanks, or thank your lucky stars wolves won’t be joining you at the table.